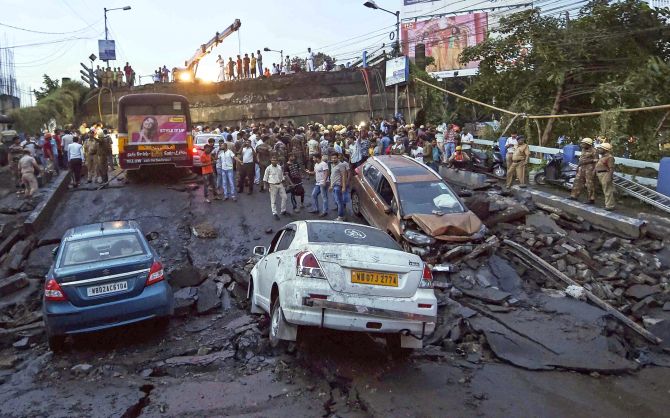 In the wake of the Majerhat bridge collapse on September 4, the West Bengal public works department has identified seven bridges in the city as "most vulnerable" requiring urgent repairs, a senior official of the department said.


The seven bridges are out of the 20, which, the PWD has classified as "distressed" structures. The seven bridges labelled as "most vulnerable" are Bijon setu, Gouribari Aurobindo Setu, Belgachhia bridge, Tollygunge Circular Road bridge, Dhakuria bridge, Tallah bridge and Santragachi bridge, the PWD official told PTI.


"Load-bearing capacities of these bridges were carried out and depending on that report, we have suggested to the police to impose restriction on goods-carrying vehicles to prevent further deterioration of the condition of the distressed structures," he said.


The Kolkata Police has already banned movement of all goods vehicles on the first four bridges and is exploring the possibility whether a similar decision can be taken for the remaining ones, a senior officer of Kolkata Traffic Police said.


Image: Three persons were killed and 24 injured in the September 4 collapse of a portion of Majerhat bridge.
« Back to LIVE