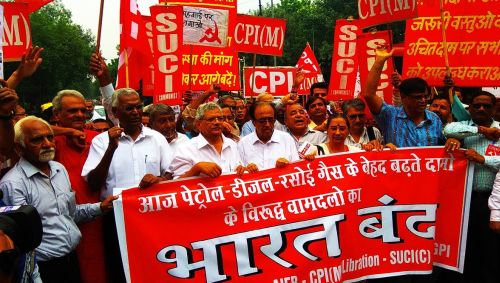 Shiv Sena MP Sanjay Raut Monday dismissed talks of senior BJP leaders asking his party to stay away from the nationwide bandh called by the Congress to protest the rising prices of fuel. Raut asserted it was the Shiv Sena's own decision to not take part in the "Bharat Bandh" and its stand had nothing to do with the BJP.


The Uddhav Thackeray-led outfit is part of the BJP- headed governments at the Centre and also in Maharashtra. There have been talks in political circles that the BJP, facing the opposition fire over the rising prices of fuel, had persuaded its bickering Maharashtra-based ally to stay away from the Congress-sponsored bandh. -- PTI


Image: CPI-M joined 20 other opposition parties to protest the escalating fuel prices in the country.
« Back to LIVE