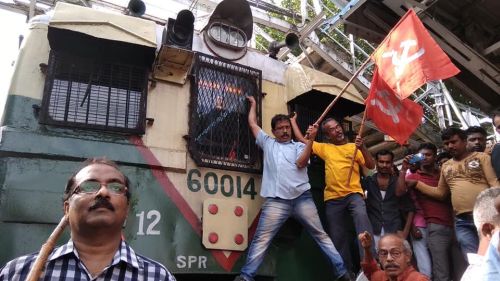 Distressed people are forcing opposition parties to come together against the "anti-people" government of the BJP at the Centre, CPI-M leader Sitaram Yechury said Monday at a rally called by Left parties in Delhi against rising fuel prices. Seven Left parties, including CPI-M, CPI, RSP, Forward Block, CPI-ML, Socialist Unity Centre of India (Communist) and Communist Ghadar Party of India, staged a demonstration, alleging that the rise in fuel prices has a cascading inflationary effect. They said this effect is contributing to economic slowdown and reducing employment and new job opportunities.


The protest rally by Left parties was unrelated to the 'Bharat Bandh' being observed by Congress and other opposition parties. "Left parties call on people to join this protest in a big way to demonstrate people's rejection of the Modi government and its policies. Distressed people of the country are forcing opposition parties to come together against the anti-people BJP government at the Centre," Yechury told the people gathered at the rally.


The Left leaders were joined by members of the Aam Aadmi Party, which governs Delhi. The Left leaders said the BJP was not batting an eyelid over the miseries it has created for the people. The ruling party is "daydreaming" to be in power for 50 years, they said, referring to BJP chief Amit Shah's claim at the party's national executive meet in Delhi Sunday.


"They did not even mention about the fuel price hike, farmers' distress in their executive meet. It shows they are not worried about the people but only want to be in power. They are daydreaming. They will not come back to power in the coming 50 years," said CPI leader D Raja.


There will be more protest by a "united opposition" and that is why the Modi government is nervous, Yechury claimed. The Left parties blamed the central excise duty levied on fuel for the increasing prices and demanded steps to contain the rise in the prices.


"They (BJP leaders) boast of ruling 21 states so why can not their state governments reduce the price. It was the Left Front government in Kerala, which first reduced the fuel price by one rupee two months ago," Yechury said.


The Left parties also alleged that the BJP was trying to divert people's attention away from their "monumental failures" by spreading an atmosphere of hate, violence which the ruling party will not succeed. Left leaders, including Yechury and Raja, later courted arrest at Parliament Street police station. -- PTI