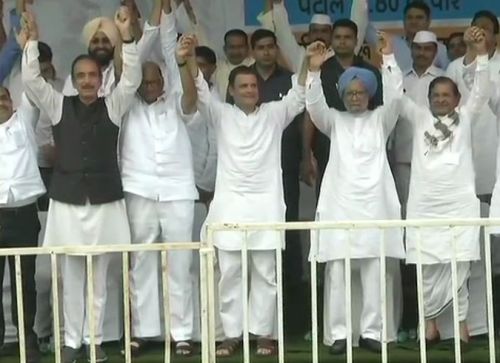 Large-scale protests were seen in different parts of the country as senior leaders and party workers from 21 opposition parties took to roads as part of the Congress-led Bharat Bandh against the steep rise in petrol and diesel prices.


Normal life was hit in some states Monday with offices and educational institutes closed and vehicles off the roads during an opposition sponsored 'Bharat Bandh' which was largely peaceful, barring some incidents of violence.


A three-year-old girl died in Bihar's Jehanabad district which the BJP alleged was due to delay in find a vehicle to take her to the hospital. However, Sub-divisional officer Jehanabad, Paritosh Kumar said, "The death of the child is not related to bandh or traffic jam, the relatives had left late from their home."


The bandh was called by 21 opposition parties led by Congress president Rahul Gandhi. It was kickstarted at Rajghat where Gandhi offered holy water from his Kailash Mansarovar yatra. He then accompanied opposition leaders then marched to Ramlila Maidan from Rajghat.


In states like Kerala, Karnataka, Bihar, Odisha and Arunachal Pradesh life was hit by the shutdown, but Uttar Pradesh, West Bengal and Mizoram remained largely unaffected.


Rahul Gandhi alleged hatred was being spread and the country being divided under the rule of Prime Minister Narendra Modi. Former prime minister Manmohan Singh said it was time for all opposition parties to shed their differences and move forward unitedly "to save" sovereignty and democracy.


The BJP dubbed the bandh as an attempt to spread rumour and confusion among the masses and said people will "puncture the grand alliance balloon" floated by the opposition party.


A group of Loktantrik Janata Dal workers in Patna was seen carrying a motorbike on their shoulders during a march to protest against the hike in fuel prices.


A similar situation was also seen in Delhi's Preet Vihar area, where Congress workers carried a motorcycle on a bullock cart during the protests.

Congress workers blocked a train at Odisha's Sambalpur while protesting along with other opposition parties in the morning.