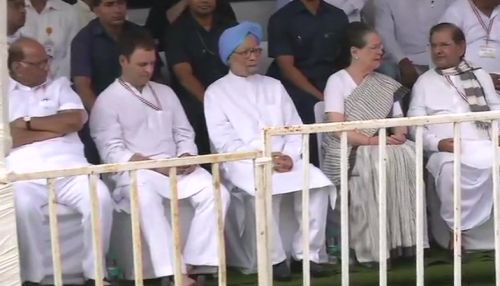 
In Mumbai: Services on the city's lifeline, the suburban trains, were crippled in Andheri today with Congress workers staging a rail roko.


In Odisha, Congress workers blocked a train at Sambalpur while protesting along with other opposition parties in the morning.


Karnataka: Bus services of North Eastern Karnataka Road Transport Corporation are not operational today due to the 'Bharat Bandh'.
The Karnataka government has declared a public holiday today for schools and colleges in Bengaluru as a precautionary.


Security was heightened in various parts of Pune in view of the Bharat Bandh announced by the Congress Party against the hike in prices of petrol and diesel under the present dispensation. MNS workers have vandalised a city bus.

Commissioner Of Police, Pune City, Dr Venkatesham K. told ANI, "One SPRF company and 6000 police officials have been deployed in the city to prevent any unlawful action. Whoever tries to forcefully close the market will need to face the action by Pune Police."


He also took to his Twitter handle to inform about the extra deployment of forces across the city. He also wrote that firm action will be taken against miscreants who disobey the law.


20 other political parties, including the Nationalist Congress Party (NCP), Dravida Munnetra Kazhagam (DMK) and the Samajwadi Party (SP), have extended their support to the Congress party against the fuel price hike.


In the wake of the same, the Mumbai Police served a notice to Maharashtra Navnirman Sena party (MNS) under section 149, which states that in case of any law and order situation in Mumbai, the party will be held responsible for the same.