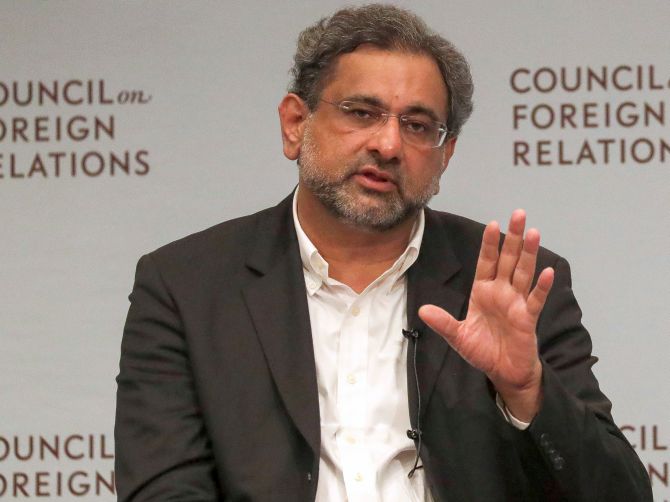 A Pakistan court on Monday issued bailable arrest warrants against former prime minister Shahid Khaqan Abbasi for skipping proceedings in a case seeking action against him for disclosing the minutes of a high-profile security meeting to his party leader Nawaz Sharif.
The petition also seeks action against Sharif under treason charges for claiming that those involved in the deadly 2008 Mumbai terror attack belonged to Pakistan.
A Lahore high court's three-member bench headed by Justice Syed Mazahar Ali Akbar Naqvi again issued notices to Sharif and a Dawn journalist, who had interviewed the Pakistan Muslim League-Nawaz supremo.
The bench was annoyed when no one appeared before the court on behalf of the three respondents -- Sharif, Abbasi and the reporter.
"The LHC issued bailable arrest warrants against Abbasi, directing the authorities concerned to send notices to Nawaz Sharif through superintendent of Adiala Jail, Rawalpindi and the Dawn reporter through Senior Superintendent Police Operations Islamabad," a court official said.
Justice Naqvi observed that Abbasi should have attended the court as he was present during the previous hearing on June 29.
Petitioner's lawyer told the court that Abbasi was in Lahore to run his campaign for the by-poll on National Assembly seat NA-124 but he avoided the court hearing.
The petitioner said Sharif, who was disqualified by the Supreme Court in the Panama Papers case in July 2017 and subsequently jailed for 10 years in last July in Avenfield corruption case, in the interview to the Dawn reporter in May last made the remarks that those involved in the Mumbai attack case actually belonged to Pakistan thus committed treason.
The petitioner said the 'anti-state' statement of Sharif -- a three-time prime minister -- could be used against Pakistan by its enemies.
She said a meeting of the National Security Council (NSC) was held to discuss the 'misleading' statement of the disqualified premier and later the then prime minister Abbasi met Sharif and conveyed to him the concerns of the military leadership on his statement.
"The act of Abbasi was also a clear violation of his oath as he was bound not to allow his personal interest to influence his official conduct," she said.
The court adjourned the hearing till September 24.  -- PTI
« Back to LIVE