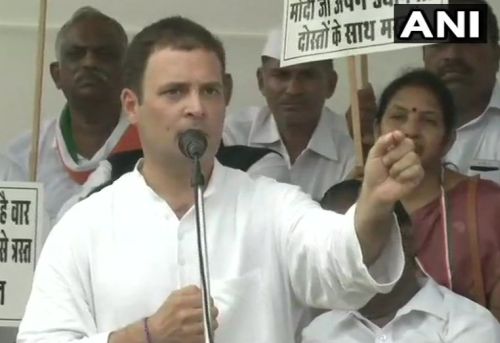 Congress president Rahul Gandhi holds forth on rising fuel prices at Jantar Mantar in Delhi. An united opposition will defeat the BJP in the next elections, the Congress chief said. "Narendra Modiji is silent, he has not spoken a word on rising prices of fuel, or the condition of farmers, neither on atrocities against women," Rahul said.


Soon after his return from the Kailash Mansarovar yatra, Rahul reached Rajghat and paid his tributes to Mahatma Gandhi. The bandh began after Gandhi offered holy water from the pilgrimage there.


Leaders of various opposition parties led by Congress president Rahul Gandhi kickstarted Monday the country-wide protest against rising fuel prices from Rajghat as part of the 'Bharat Bandh' call given by the party.
« Back to LIVE