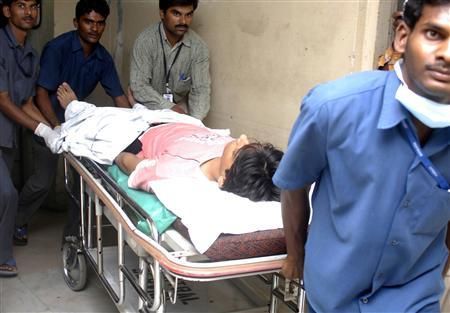 A local court is likely to pronounce Tuesday its verdict in a case related to twin bomb blasts at Gokul Chat and Lumbini Park in Hyderabad in 2007 that claimed 44 lives and left 68 injured. On August 27, Second Additional Metropolitan Sessions Judge T Srinivas Rao postponed the judgment in the case to September 4.


The Counter Intelligence wing of the Telangana Police had investigated the case and arrested five accused, all alleged Indian Mujahideen operatives.


The trial against five accused in the case was shifted to a court hall located on the premises of Cherlapalli Central Prison from a court located in Nampally Court complex in June this year.


The accused were charged under section 302 (murder) and other relevant provisions of the IPC and sections of Explosive Substances Act in connection with the twin blasts on August 25, 2007, and also with regard to the recovery of an unexploded bomb found under a footover bridge at the Dilsuknagar area  - PTI


Image: An person injured in the bomb blast at Lumbini Park, Hyderabadm in 2007, is taken to hospital
« Back to LIVE