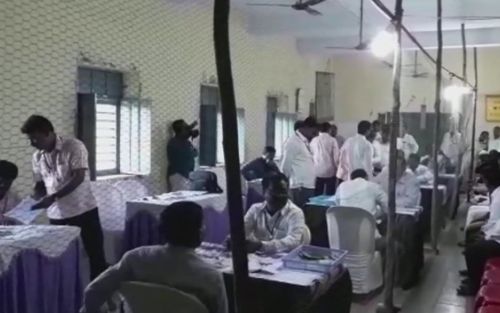 As counting of votes for the recently held urban local body polls is underway, results declared so far reveal that the Congress is leading.

Out of the total 2664 seats, the results for 2267 have been announced and Congress has managed to win 846 seats, while the Bharatiya Janata Party  bagged 788, and the Janata Dal (Secular) won 307 seats, with the remaining going to independent candidates.

The polling was held in 2,529 wards, spread over 29 city municipalities, 53 town municipalities and 23 town panchayats, and in 135 wards of three city corporations of the state.

The civic election was earlier scheduled to be held in 105 urban local bodies. However, polling in three areas was postponed due to the onset of heavy rains and subsequent flash floods in Kodagu district. - ANI


Image: Votes being counted for the civic polls in Karnataka
« Back to LIVE