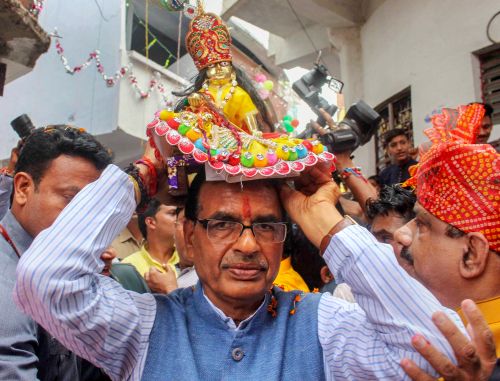 A day after his vehicle was attacked with stones, Madhya Pradesh Chief Minister Shivraj Singh Chouhan said on Monday that the Congress was "thirsty" for his blood and if he were to die, he would take birth again to serve the people of the state.
Chouhan's vehicle was attacked Sunday night at Churhat in Sidhi district while he was touring the area as part of his "Jan Ashirwad Yatra". While no one was hurt in the incident, a windowpane of the vehicle, modified as a chariot, was damaged.
Nine suspected Congress workers have been arrested in this connection, state Home Minister Bhupendra Singh informed Monday.
"The Congress is thirsty for my blood. It has never happened in Madhya Pradesh's politics. Different schools of thought keep on struggling and parties used to organise their programmes, but such a thing has never happened," Chouhan said at a function at the Central Jail here on the occasion of Janmashtami.
"Stones were hurled at the yatra of a political party. This has never happened in Madhya Pradesh politics. Such attacks are not good for democracy. Not good for Madhya Pradesh as well as the Congress, " he said.
Taking a swipe at the Congress' top leadership, the chief minister said, "I wish to ask senior Congress leaders including Sonia Gandhi, party president Rahul Gandhi and state chief Kamal Nath in which direction they want to take the party."
He also asked the Congress leadership if they felt what the party's leaders and workers were doing was right.
"I live for the people. Even if I die, I will come back again by taking rebirth to serve them. But this type of politics (attack on his vehicle) has no place in the state.
"Fight me on the ground, with my thoughts, you say your things and I will say mine. In what direction do you wish to take the state by hurling stones in the dark," Chouhan questioned.
He brushed aside the Congress' contention that people opposed to the recent amendments to the SC/ST (Prevention of Atrocities) Act were behind the Churhat stone-pelting incident.
"I am touring the entire state. It has not happened anywhere, only in Churhat," Chouhan said.
Churhat is the assembly constituency of Ajay Singh, the Leader of Opposition in Madhya Pradesh. -- PTI
Photograph: PTI Photo
« Back to LIVE