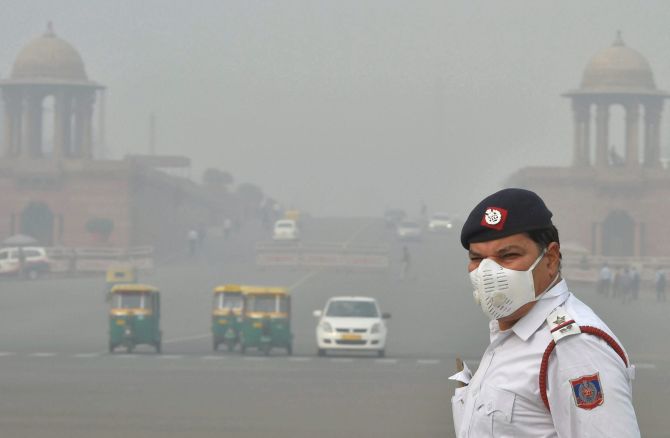 Delhi's air quality remained "very poor" on Thursday even as parts of the massive Bhalswa landfill site continued to smoulder.
As the air quality showed no signs of improvement, the South Delhi Municipal Corporation has decided to act against burning of leaves and garbage.
The Central Pollution Control Board recorded the overall Air Quality Index of Delhi at 331 in the evening, the worst in the season so far.
Faridabad, Noida, Greater Noida, Ghaziabad and Gurgaon also recorded "very poor" category air Thursday, according to the CPCB data.
The air quality in the capital had shown signs of improvement Monday as it moved from "very poor" to "poor" category.
However, it dipped to "very poor" again on Wednesday even as firefighting continued at the Bhalswa landfill site in north-west Delhi.
Meanwhile, the SDMC said it was going to intensify work on stopping incidents of waste and leaves burning by conducting night patrolling in all four zones in its jurisdiction.
The civic body said it has decided to depute six-member teams headed by its sanitation supervisors in all four zones to intercept the burning of leaves and garbage, and fine violators on the spot under the Nation Green Tribunal rules.
"Five-five teams have been constituted in each zone. The teams will take rounds of localities prone to cases of burning of leaves and garbage. The teams will intercept the incidents of burning and warn them, apart from slapping a fine," the SDMC said in a statement.
-- PTI
« Back to LIVE