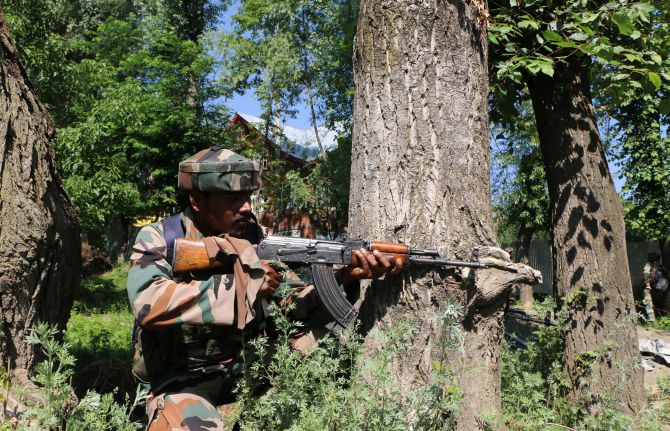 Two heavily armed Pakistani intruders and three soldiers were killed Sunday in a gunfight after the Army foiled an infiltration bid along the Line of Control in Rajouri district of Jammu and Kashmir, a defence spokesman said.
The slain intruders are believed to be members of a Border Action Team comprising Pakistan army jawans and trained militants, an army officer said on condition of anonymity.
"At about 1.45 pm, Indian Army in Sunderbani sector had a fierce encounter with heavily armed Pakistani intruders very close to the LoC. The patrol (team) killed two intruders and recovered war-like stores including two AK-47 rifles," the spokesman said.
He said three soldiers were killed while fighting the intruders and another soldier suffered grievous injuries and has been airlifted to the Army Command hospital in Udhampur.
The injured soldier's condition is reported to be stable, the spokesman said.
He said the area near the encounter site was cordoned off and a "search-and-destroy" operation is in progress.
-- PTI
« Back to LIVE