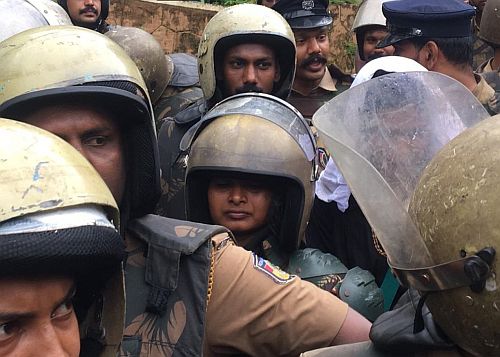 So, history will not be made.

The two women attempting to enter the Sabarimala shrine on Day 3 after the temple opened for prayers, have decided to return.

This comes after the Sabarimala priests said prayers will not be offered and the temple will be closed if the women enter.


The women then said they will not enter the temple. The police will now escort the women down from the temple in the same way that they were escorted up.


Two women, including a reporter from Hyderabad, began trekking to Sabarimala hill Friday amid strong protests by devotees opposing the entry of girls and women of menstrual age into the Lord Ayyappa temple.


Their attempt to reach the shrine came a day after a New Delhi-based woman reporter of a foreign media outlet made a failed bid to visit the temple.


Police led by IG S Sreejith have have thrown a security ring around the women who had requested security to go to Sabarimala Sannidhanam. There have been strong protests by devotees opposing the entry of girls and women of menstrual age into the Lord Ayyappa temple. The woman reporter is in her late 20s while the details of the second woman, who was carrying Irumudikkettu (holy bundle), was not immediately known.
« Back to LIVE