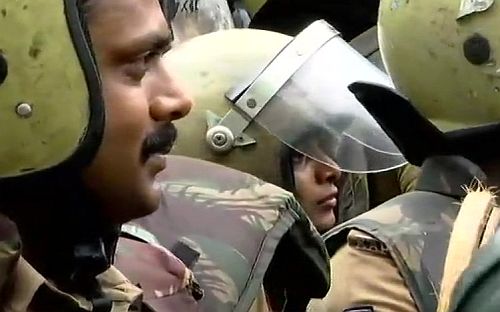 Journalist Kavitha Jakkal of the Hyderabad-based Mojo TV and woman activist and devoteee Rehana Fatima are en route to the Sabarimala temple, escorted by a posse of 100 cops. The women are now very near the temple.


Their attempt to reach the shrine came a day after a New Delhi-based woman reporter of a foreign media outlet made a failed bid to visit the temple.


Police led by IG S Sreejith have have thrown a security ring around the women who had requested security to go to Sabarimala Sannidhanam. "Police will not create any issue in Sabarimala and we don't want a confrontation with devotees. We are only following the law. I will be discussing with the higher authorities and brief them on the situation,"  Inspector General S Sreejith told devotees.


Dewasom minister K Surendran weighed in on the issue saying, "Don't make temple a platform for activism. Genuine devotees will be escorted to the temple."


There have been strong protests by devotees opposing the entry of girls and women of menstrual age into the Lord Ayyappa temple. The woman reporter is in her late 20s while the details of the second woman, who was carrying Irumudikkettu (holy bundle), was not immediately known.


If they climbed the hills, they would be the first women from the menstruating age group to visit the Sabarimala temple of Lord Ayyappa after the Supreme Court order permitting women of all age groups to enter the shrine.


On Thursday, the New Delhi-based woman journalist was stopped midway by devotees opposing the entry of women of menstrual age into the hill shrine.


The journalist accompanied by her male colleague, a foreigner, descended the hills from Marakkoottam area in the face of mounting protests. A case has been registered against devotees who allegedly prevented her trekking and forced her to climb down the hills.


Image: Journalist Kavitha Jakkal of Hyderabad-based Mojo TV, being escorted by police from Pamba to Sannidhanam.
« Back to LIVE