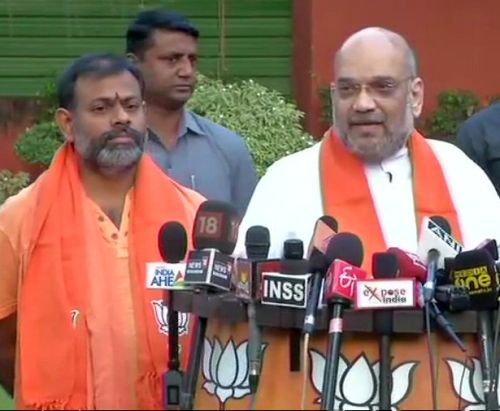 Swami Paripoornananda, founder of Hindu Vahini, joined the Bharatiya Janata Party Friday, with party president Amit Shah expressing confidence that the addition will boost his party's prospects in the Telangana assembly election.
Shah said Paripoornananda has made a big contribution in the fields of social service and religious activities in south India and his presence in the party will strengthen it a lot, especially in Telangana and Andhra Pradesh.
"His joining the BJP will infuse new energy into the party and boost its election prospects in Telangana," Shah, flanked by Paripoornananda and party general secretary Ram Madhav, told reporters.
Paripoornananda said he would work as a 'sevak' of the BJP with zero expectation and spread its message to southern parts of the country.
He was recently externed from Hyderabad by the city police for allegedly making provocative speeches but got a stay on the order from a court.
A Hindutva leader and strong votary of building Ram temple in Ayodhya, he may be fielded by the BJP in election,  party sources said.
The assembly poll in the state would be held on December 7. -- PTI
« Back to LIVE

Australia opted to bat on a bright and sunny afternoon with a packed house witnessing the title clash of the first ever women's cricket competition in CWG history.