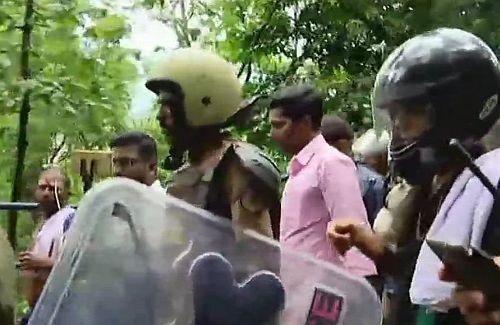 Union Ministry of Home Affairs through a letter sent on October 16 to Chief Secretaries and Director Generals of Police of three southern states -- Kerala, Tamil Nadu and Karnataka -- had made it clear that there might be law and order situation in Sabarimala Shrine and surrounding areas in view of the recent Supreme Court order.


MHA had also said that comprehensive security arrangements would be required at the Sabarimala Shrine on the date of its opening for monthly rituals on October 17.


The MHA had forewarned the Kerala, Tamil Nadu and Karnataka states governments about the trouble brewing in the area ahead of Sabarimala Temple opening and suggested the chief secretaries and police chiefs of these states to take precautionary measures to maintain law and order and make appropriate security arrangements to prevent untoward incidents.


This included keeping a close watch on dissemination of adverse information through social media and internet services.


The MHA letter said that while there are certain civil-women right activists, Left parties, pro-LWE groups who have been campaigning in favour of women's entry into the shrine and actively using women to do so on October 17, there will be opposing groups and activists who have threatened to not to allow entry of women.


The MHA had also alerted the states that the Hindu outfits had plans to organise protests on October 17 against the Supreme Court's order at Nilackal village in Pathanamthetta district and Erumeli village Kottayan districts.


MHA had also made it clear to the states that in addition to this, Ayyappa devotees, Hindu outfits, and certain caste-based outfits were separately organising state-wide protests against the Supreme Court order.


Keeping in view of these situations the states were asked to take adequate steps with regard to security, law and order situation. -- ANI
« Back to LIVE