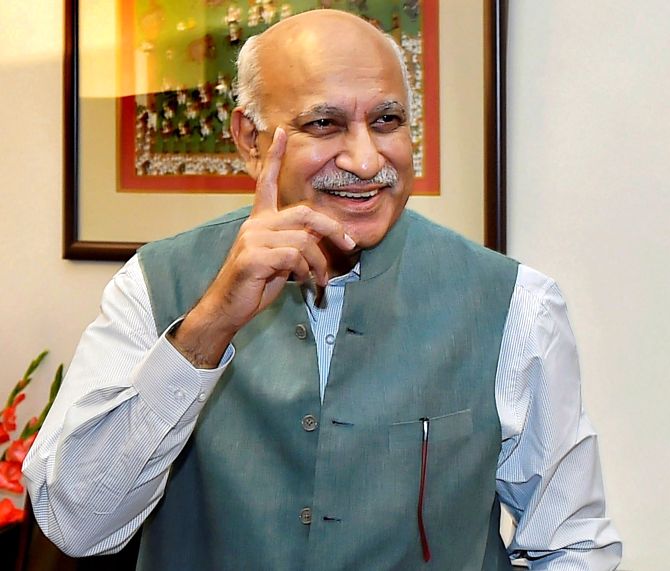 M J Akbar attended official meetings on Monday and Tuesday as the junior external affairs minister after returning from a trip abroad, the ministry said on Thursday, in first comments on the issue.
At a press conference, MEA Spokesperson Raveesh Kumar, replying to a question, said he was not aware of any specific meeting between External Affairs Minister Sushma Swaraj and Akbar on the allegations levelled against him.
Akbar, a former journalist, stepped down on Wednesday in the face of mounting pressure following a spate of allegations of sexual harassment against him by several women journalists.
He was on a trip to Africa when the allegations of sexual harassment surfaced against him as part of the #MeToo movement in India.
Hours after returning home on Sunday, he issued a statement trashing the allegations. However, he quit following increasing pressure on him as more women came out with accounts of alleged sexual harassment by him.
Asked whether it was his own decision to quit or whether Swaraj or Prime Minister Narendra Modi sent any communication to him to resign, Kumar only said, "The minister has resigned. He has also issued a statement and I think beyond that I have nothing to add."
"As far as meeting is concerned, I can only share with you that since he has returned to India, there were certain officials meetings in the MEA on Monday and Tuesday. He was part of those meetings. But I am not aware of any specific meeting between the external affairs minister and the MoS on this matter," Kumar said.
He did not reply when asked whether Akbar was asked to resign.
« Back to LIVE