« Back
Amarinder meets PM, presses for compensation to farmers for stubble burning
October 18, 2018  16:42 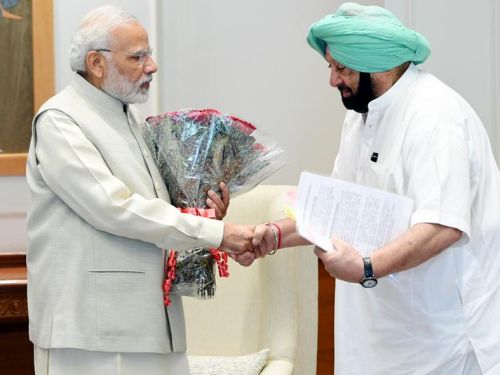 With the national capital region bracing for choking smog, Punjab Chief Minister Amarinder Singh Thursday met Prime Minister Narendra Modi to press for compensation to farmers to discourage them from burning stubble, and warned that the problem could aggravate if the matter is not addressed urgently.
The prime minister was sympathetic to the problem of farmers, said Singh, who is pressing for Rs 100 per quintal compensation to farmers to check stubble burning.
Singh told Modi that the problem of air pollution because of stubble burning could aggravate, despite steps being taken by the Punjab government, with the close of the harvest season, and needed to be addressed urgently.
The NCR region is bracing for smog due to stubble burning by farmers in neighbouring states, including Punjab and Haryana.
Delhi's air quality remained "very poor" for the second consecutive day Thursday. Several areas were nearing severe levels of pollution, authorities said.
Giving details of the meeting, an official spokesperson of the Punjab government said Singh also urged Modi to intervene to ensure settlement of the Rs 31,000 crore CCL (cash credit limit) gap and sought Centre's assistance for the preparation of the 550th birth anniversary celebrations of first Sikh guru Sri Guru Nanak Dev.
He urged Modi to advise the Finance Ministry to settle the CCL gap on the principle of shared responsibilities.
Singh pointed out that the matter had been discussed in detail in internal report of the Ministry of Food and Public Distribution, referred as the PK Jha Committee Report.
-- PTI
« Back to LIVE