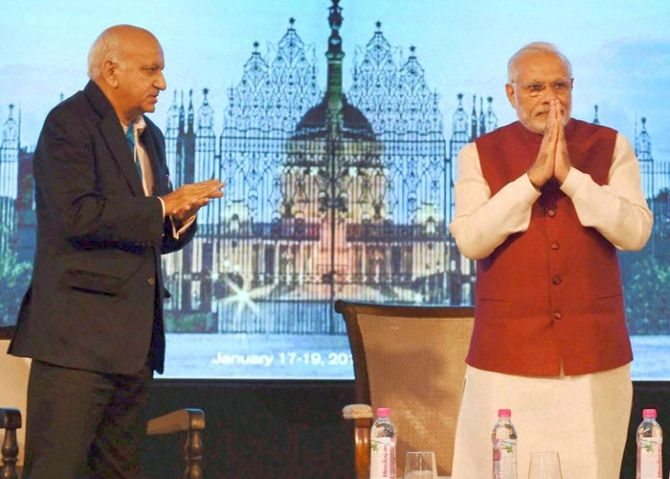 The Congress today stepped up its attack on Prime Minister Narendra Modi over the allegations of sexual harassment against Union minister M J Akbar, saying his silence was "conspicuous and unacceptable".
As the #MeToo movement gathered pace over the last fortnight, the Union minister of state for external affairs was accused by several former colleagues of sexual harassment when he served as an editor at various media organisations.
Addressing a press conference at the party office, senior party leader Anand Sharma questioned Modi's silence on the issue and said as the head of the government he should speak on the issue.
"It is for the prime minister to speak on this issue, let the country judge its PM by his actions. So far his silence is conspicuous. This question is not only the moral authority of the government, but his own also, and the dignity of the office he holds," Sharma said.
He claimed a prime minister, who swears by "Beti Bachao, Beti Padhao" and talks of women dignity, has chosen to be silent.
"His silence is unacceptable. It is the head of the government who should make his views known on the issue," Sharma said.
Akbar who returned today from a tour of Africa, said he would issue a statement later on.
Congress chief Rahul Gandhi had earlier come out in support of the #MeToo movement, saying it was time for the truth to be told "loud and clear". -- PTI
Image: Prime Minister Narendra Modi with minister of state for external affairs MJ Akbar at the Raisina Dialogue II in New Delhi on Jan 18, 2017. Photograph: PTI Photo
« Back to LIVE