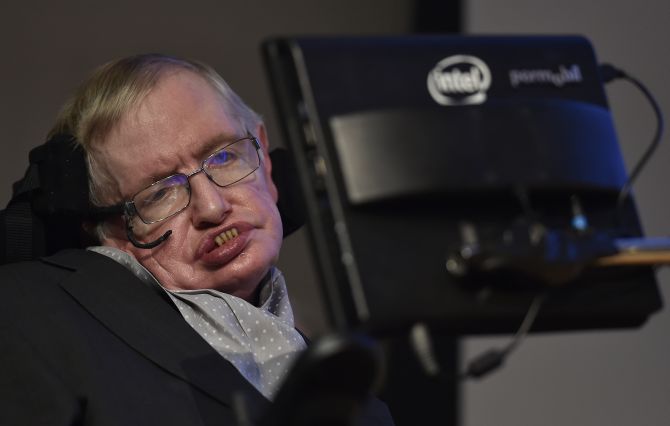 Stephen Hawking, one of the world's best-known theoretical physicists who died seven months ago, had warned against a new race of "superhumans" created as a result of genetic engineering that could destroy humanity from beyond the grave.
The British author of the definitive 'A Brief History of Time', who famously often threw up the prospect of time travel, made his last prediction about scary superhumans in a final collection of articles and essays to be published next week, following his death in March at the age of 76.
"Once such superhumans appear, there will be significant political problems with unimproved humans, who won't be able to compete," Hawking wrote.
"Presumably, they will die out, or become unimportant. Instead, there will be a race of self-designing beings who are improving at an ever-increasing rate," noted the scientist, who suffered from motor neurone disease that had left him almost completely paralysed for most of his life.
The set of articles on what he called "the big questions" were in preparation for a book, which is set to be published on Tuesday. According to 'The Sunday Times', in 'Brief Answers to the Big Questions', Hawking suggests that wealthy people will soon be able to choose to edit their own and their children's DNA to create superhumans with enhanced memory, disease resistance, intelligence and longevity.
"I am sure that during this century people will discover how to modify both intelligence and instincts such as aggression," he wrote.
"Laws will probably be passed against genetic engineering with humans. But some people won't be able to resist the temptation to improve human characteristics, such as memory, resistance to disease and length of life," he adds.
Hawking's theory refers to techniques such as Crispr, a DNA-editing system that allows scientists to modify harmful genes or add new ones. Invented just six years ago, it is already in use worldwide.
Many scientists welcomed Hawking's predictions as a means of saving Earth from destruction.
"Humans have arguably reached a critical moment," Chris Rapley, professor of climate science at University College London, told the newspaper.
"We have moved beyond affecting the planet at the landscape scale to interfering with its very metabolism at the global scale. All the indications are that the limitations of our brains, both individually and collectively, leave us incapable of addressing the challenge. On this basis the future looks desperately gloomy," he said.
The final set of research by Hawking will be presented by the Stephen Hawking Foundation and John Murray publishers in the form 'Brief Answers to the Big Questions' next week. -- PTI
« Back to LIVE