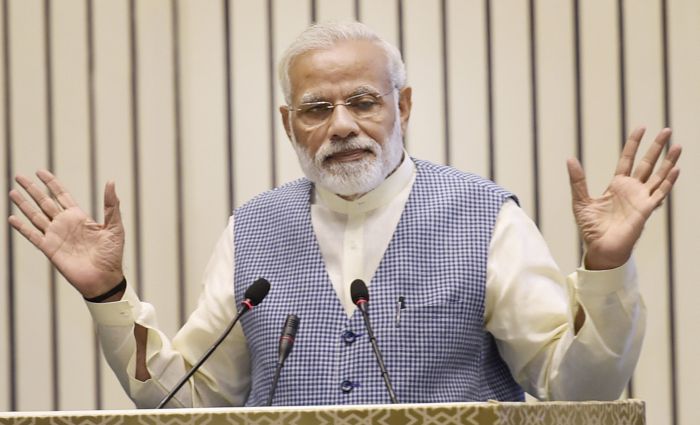 Prime Minister Narendra Modi will on Monday brainstorm with chief executives of top global and Indian oil and gas companies on emerging energy scenario, with ripples from United States sanctions on Iran and volatile oil prices threatening growth.
The third annual meeting would also deliberate on ways to revive investment in oil and gas exploration and production, official sources said.
Modi's first meeting was on January 5, 2016 where suggestions for reforming natural gas prices were made. More than a year later, the government allowed higher natural gas price for yet-to-be-produced fields in difficult areas like deep sea.
In the last edition in October 2017, suggestions were made for giving out equity to foreign and private companies in producing oil and gas fields of state-owned Oil and Natural Gas Corp and OIL. But the plan could not go through in view of strong opposition from Oil and Natural Gas Corp.
Sources said Saudi Oil Minister Khalid A Al Falih, BP CEO Bob Dudley, Total head Patrick Fouyane, Reliance Industries Chairman Mukesh Ambani and Vedanta chief Anil Agarwal are expected to attend the meeting Monday.
The meeting, coordinated by the NITI Aayog, is likely to focus on challenges posed by volatile oil prices and the US sanctions on Iran.
The meeting would look at measures to attract investments and steps for making it easier to do business in India.
Sources said reforms initiated in the last four years in the oil and gas sector, including open acreage policy, pricing reforms and liberalised licensing policy, will be showcased and suggestions would be sought on what more can be done to hasten growth.
The government is looking at private investment to raise domestic oil and gas production, which has stagnated for the last few years while fuel demand has been rising by 5-6 per cent annually. India is dependent on imports to meet 83 per cent of its demand and more than half of its natural gas requirements.
The prime minister in 2015 had set a target of reducing India's oil dependence by 10 per cent to 67 per cent (based on import dependence of 77 per cent in 2014-15) by 2022. Import dependence has only increased since then and the government is now looking for ways to raise domestic output. -- PTI
« Back to LIVE