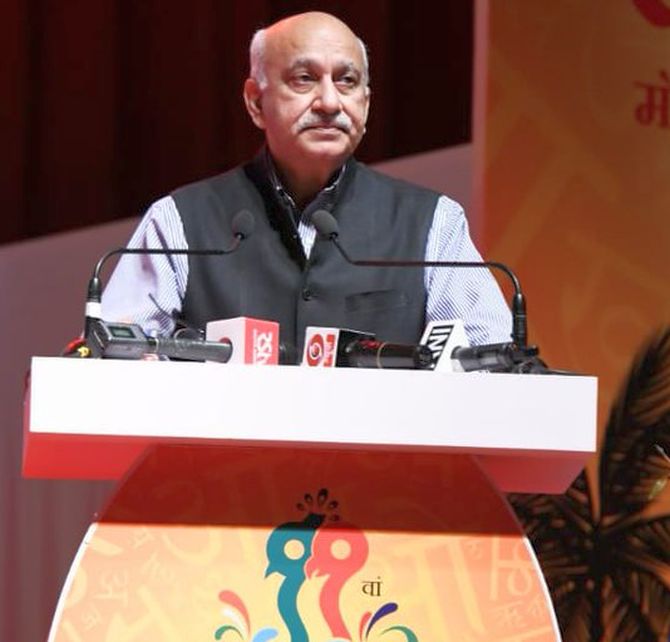 Union minister Ramdas Athawale said on Sunday that Union minister M J Akbar should resign if the allegations of sexual misconduct levelled against him were found to be true.
Replying to queries at a press conference in Pune, he cautioned that the #MeToo movement should not become a platform to level baseless allegations.
Athawale, who is the Union minister for social justice and empowerment, said Akbar should resign as Union minister if he was found guilty.
"If someone is insulting women, action should be taken against such an individual. Even if personalities like Nana Patekar or M J Akbar are found guilty, action should be taken against them," Athawale said.
"If someone is guilty, the person should be punished. But according to me, there is a possibility that the platform could be used to implicate someone in a false case. Police should verify such allegations," the minister added.
While Patekar was accused by actor Tanushree Dutta of misbehaving with her during a film shoot in 2008, multiple women in the last few days have come out with accounts of alleged sexual harassment by Akbar when he was a journalist.
Akbar Sunday rejected the allegations of sexual misconduct levelled as "false and fabricated" and vowed legal action, while suggesting this was part of an "agenda" as the charges came a few months before a general election.
On being asked about a number of these allegations coming to light several years after the alleged incidents, Athawale said evidence would come up even now if investigations were conducted properly.
The Republican Party of India leader said not all allegations under the #MeToo movement were of a very serious nature but they mostly concerned cases of inappropriate touch and misbehaviour.
"However, all allegations need to be investigated," he said.
Athawale said the Union government had appointed a committee comprising retired judges to probe the cases. -- PTI
« Back to LIVE