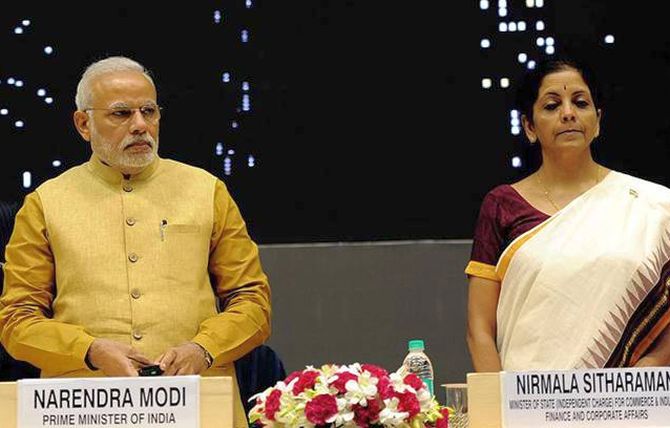 Congress president Rahul Gandhi on Wednesday raised questions on Defence Minister Nirmala Sitharaman's France visit, alleging that work has begun to justify the prime minister's decision to buy Rafale fighter aircraft.
He took to Twitter to say while the Supreme Court has asked for the details of the Rafale decision-making process, the decision to buy the fighter aircraft was taken by Prime Minister Narendra Modi.
Gandhi alleged that processes to justify Modi's decision are being invented.
'The Supreme Court has asked for the RAFALE decision making process. It's quite simple really...
'The PM decided. The processes to justify his decision are yet to be invented. But work has begun.
'Ps. In this connection, Raksha Mantri is leaving for France tonight,' he said on Twitter.
Defence Minister Sitharaman leaves for France tonight on a three-day visit, which comes in the backdrop of a big controversy over the purchase of 36 Rafale jets from French aerospace major Dassault Aviation.
Officials sources said Sitharaman will hold wide-ranging talks with her French counterpart Florence Parly on ways to deepen strategic cooperation between the two countries and deliberate on regional and global issues of mutual interests.
Sitharaman will also hold with Parly the first edition of defence dialogue, they said.
The sources said besides exploring ways to boost bilateral defence cooperation, Sitharaman will take stock of progress in the supply of 36 Rafale jets by Dassault to the Indian Air Force under a Rs 58,000-crore deal.
Prime Minister Modi had announced the procurement of a batch of 36 Rafale jets after talks with then French President Francois Hollande on April 10, 2015 in Paris.
The final deal was sealed on September 23, 2016.  -- PTI
« Back to LIVE