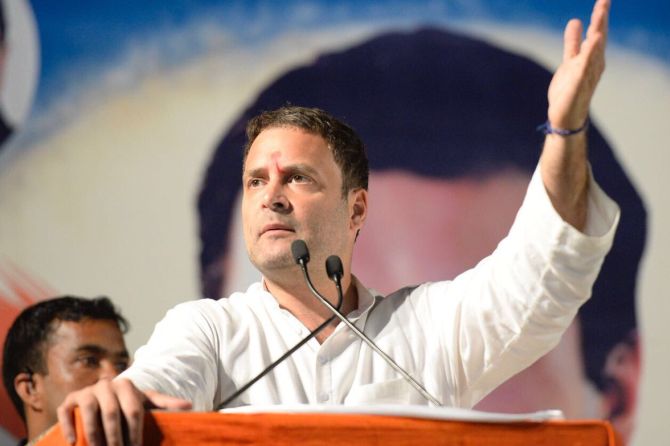 Seeking to step up his attack over the Rafale fighter jet deal, Congress president Rahul Gandhi is slated to meet on October 13 employees of the Hindustan Aeronautics Limited, which the party has alleged was overlooked in the offsets contract with French aerospace company Dassault Aviation.
Karnataka unit Congress president Dinesh Gundu Rao said Gandhi will talk to the employees of the Bengaluru-based HAL about the controversial deal and also address a rally in the city.
'Shri Rahul Gandhi will meet employees of HAL in Bengaluru on October 13. He will be talking about the controversial #RafaleDeal, and will also address a party workers rally in the city,' Karnataka Pradesh Congress tweeted quoting Rao as saying.
The Congress, which has been accusing the government of benefiting the Reliance Defence Ltd of Anil Ambani from the deal, has also been demanding answers on why the state-run aerospace major HAL was not involved in the deal as finalised during the United Progressive Alliance.
The party had been accusing Prime Minister Narendra Modi of snatching jobs of people of Karnataka by taking away the contract from HAL.
Gandhi had been saying that had HAL been selected in place of Reliance Defence it could have generated employment to scores of unemployed youth in the state.
The BJP has dismissed all allegations as false.  -- PTI
« Back to LIVE