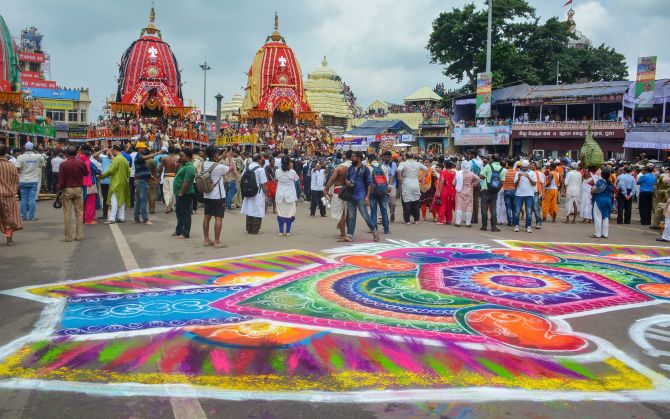 The Supreme Court Wednesday took note of the October 3 violence at Puri's Jagannath temple during a protest against the introduction of a queue system for devotees and said no policeman should enter the temple with weapons and shoes.


A bench comprising Justices Madan B Lokur and Deepak Gupta was informed by the Odisha government that 47 persons were arrested in connection with the violence in the temple and the situation was under control now.


The state government also told the bench that no violence had taken place inside the temple premises and the office of the Jagannath temple administration, which is situated around 500 meters from the main temple, was attacked and ransacked during the violence.


The counsel appearing for an organisation, which sought to intervene in the matter, claimed before the bench that policemen had entered the temple with guns and boots during the violence.


Nine policemen were injured as violence broke out on October 3 during a 12-hour bandh called by a socio-cultural organisation protesting the introduction of a queue system for devotees visiting the Jagannath Temple, police had said.


The dawn-to-dusk shutdown in the seaside town called by Sri Jagannath Sena turned violent as a mob barged into the 12th-century shrine, uprooted barricades erected on Baisi Pahacha and near Singhadwara and ransacked the office of Shree Jagannath Temple Administration.  -- PTI
« Back to LIVE