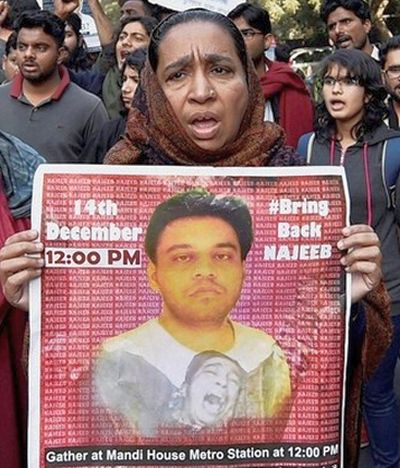 After allowing the Central Bureau of Investigation to file a closure report in the case of disappearance of Jawaharlal Nehru University student Najeeb Ahmed, the Delhi high court on Wednesday asked some media houses to retract from their websites and YouTube certain news reports and videos which allegedly link him with terrorist organisation ISIS.
Justice J R Midha issued the direction on a defamation suit moved by the student's mother, Fatima Nafees, contending that the news reports and videos are defamatory and seeking an apology as well as Rs 2.2 crore in damages from the media houses.
Advocate Nabila Hasan, who appeared for Nafees, said 'the court has directed all the defendants (media houses) to retract all articles and video clips from their websites and also remove YouTube links'.
She said the matter was listed for further hearing on October 29 when it will take up Nafees' plea seeking an apology from the media houses.
In the petition, Nafees has contended that even the Delhi Police during its investigation into Ahmed's disappearance, had not said that he had any links to the Islamic State.
The high court on Monday allowed the CBI to file a closure report in the case Najeeb Ahmed, who went missing from the university nearly two years ago.  -- PTI
« Back to LIVE