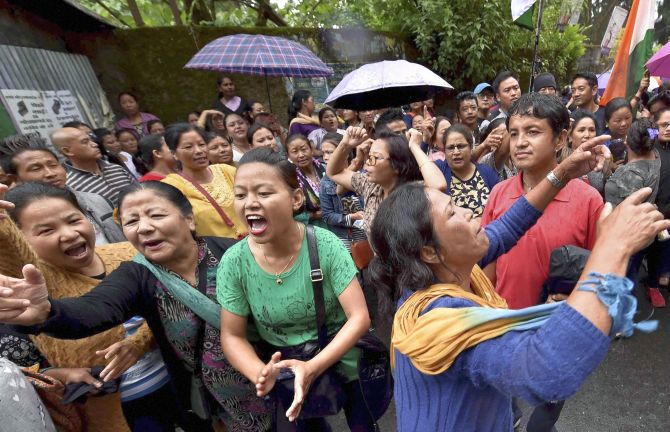 Gorkhas of Nepal holding valid identity cards and members of the community who are citizens of India and living in Assam will not be sent to foreigners tribunals to determine their nationality, the Home Ministry said on Wednesday.
In a communication to the Assam government, the ministry said only those individuals, who have come to Assam from specified territories, including Bangladesh, immediately before commencement of the Citizenship (Amendment) Act, 1985 and are not Indian citizens, can be referred to the foreigners tribunals to identify whether they are illegal immigrants or not.
A senior home ministry official, however, made it clear that Nepalese citizens living in Assam are not eligible to be included in the National Register of Citizens (NRC) as well as in the electoral rolls.
The clarification came following a representation to Union Home Minister Rajnath Singh by the All Assam Gorkha Students' Union, which cited some cases of the members of the Gorkha community living in Assam referring to the foreigners tribunals, an official statement said.
In its communication on September 24, the home ministry said the members of the Gorkha community who were Indian citizens at the time of commencement of the Constitution, or those who are Indian citizens by birth, or those who have acquired Indian citizenship by registration or naturalisation in accordance with the provisions of The Citizenship Act, 1955 are not 'foreigners' in terms of section 2 (a) of The Foreigners Act, 1946 as well as The Registration of Foreigners Act, 1939, therefore, such cases will not be referred to the foreigners tribunals.
It further emphasised that any member of the Gorkha community holding Nepalese nationality and who has arrived in India by land or air over the Nepal border even without a passport or visa and staying in India for any length of time shall not be treated as an illegal migrant if he or she is in possession of proper identity documents.
The valid identity documents are: Nepalese passport, Nepalese citizenship certificate, voter identification card issued by the Election Commission of Nepal, limited validity photo-identity certificate issued by Nepalese mission in India when deemed necessary and for children between age group of 10-18 years, photo ID issued by the principal of the school, if accompanied by parents having valid travel documents.
No such document is required for children below the age group of 10 years as per the provisions of the India-Nepal treaty signed in 1950, the statement said.
The home ministry also said the cases of members of Gorkha community falling within the parameters mentioned earlier should not be referred to the foreigner tribunals for opinion as to whether the person is a 'foreigner' within the meaning of The Foreigners Act, 1946.
Later, a senior ministry official clarified that a sizeable number cases of Nepalese citizens are pending before foreigners tribunals in Assam and the clarifications would be helpful in disposing their cases.  -- PTI
« Back to LIVE