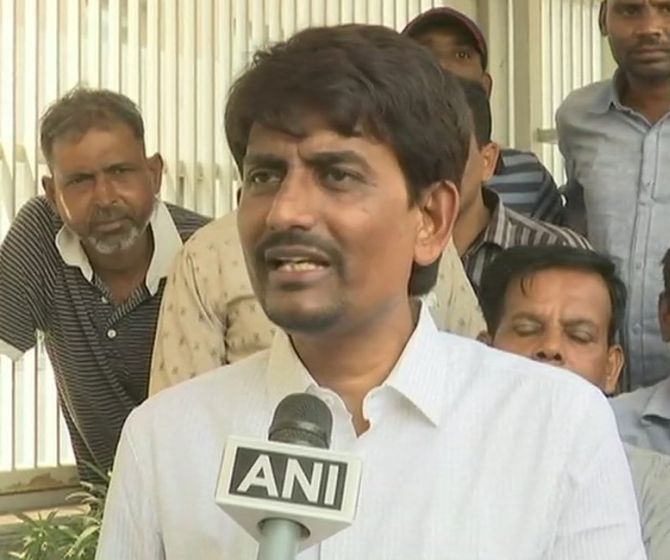 Congress MLA Alpesh Thakor, who is facing the heat over the violence against Hindi-speaking migrants in Gujarat, will be sitting on a day-long fast on Thursday to establish 'peace and harmony'.
He announced the 'Sadbhavna Upvas' (fast for goodwill) at his house a couple of days ago.
A large number of Hindi-speaking migrant workers have left Gujarat in the last few days following attacks at some places.
The ruling Bharatiya Janata Party has blamed Thakor and his outfit, Gujarat Kshatriya-Thakor Sena, for the outbreak of violence.
The outfit's name also figures in some of the FIRs filed in connection with the attacks, which started after a worker hailing from Bihar was arrested for allegedly raping a 14-month-old girl in Sabarkantha district on September 28.
The girl hails from the Thakor community. Thakor has denied any connection between his organisation and the attacks.
He has invited migrants from Hindi-speaking states and their leaders to join in the fast tomorrow, said his associate Mukesh Bharwad.
On Tuesday, the Congress leader had also invited the Chief Ministers of Uttar Pradesh and Bihar to join in the fast.
"Neither of them have confirmed their presence. He has also invited migrants and their leaders to join. Our aim is to send a message that we are not against anyone. All we want is peace and harmony in Gujarat," said Bharwad.
A video showing Thakor purportedly berating migrant workers had gone viral before the violence began.
"These people who have come from outside, they commit crime, they beat up common villagers and they go back to their states. Such people have jobs here...but our people do not have jobs here," Thakor is seen saying in a speech at Bhaucharji in Mehsana district of North Gujarat.  -- PTI
« Back to LIVE