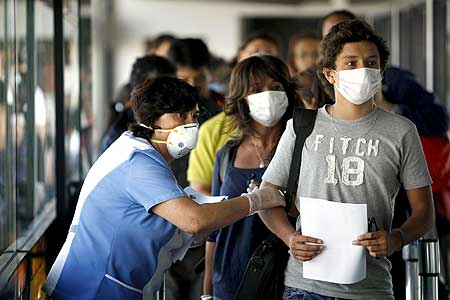 Rajasthan recorded 164 deaths due to swine flu till September this year, the highest in the country, according to official data.
According to National Centre for Disease Control (NCDC), a total of 1,652 cases of swine flu surfaced in Rajasthan till September 30.
A total of 4,484 positive swine flu cases were recorded in the country and 353 deaths occurred during the period, as per the data.
After Rajasthan, 1,167 positive swine flu cases were recorded in Maharashtra, of which 101 people succumbed to the deadly virus.
Gujarat recorded 786 cases and 30 deaths were recorded till September 30 this year.
As per the latest data of the Rajasthan Health and Family Welfare Department, a total of 1,818 positive cases of swine flu were detected in the state till October 9 this year and 182 deaths have occurred so far.
In Jaipur, 822 people tested positive for the virus and 36 deaths were recorded.
It was followed by 291 cases and 23 deaths in Kota, 105 cases and 18 deaths in Jodhpur district and 62 cases and 15 deaths in Baran district, the department said.  -- PTI
« Back to LIVE