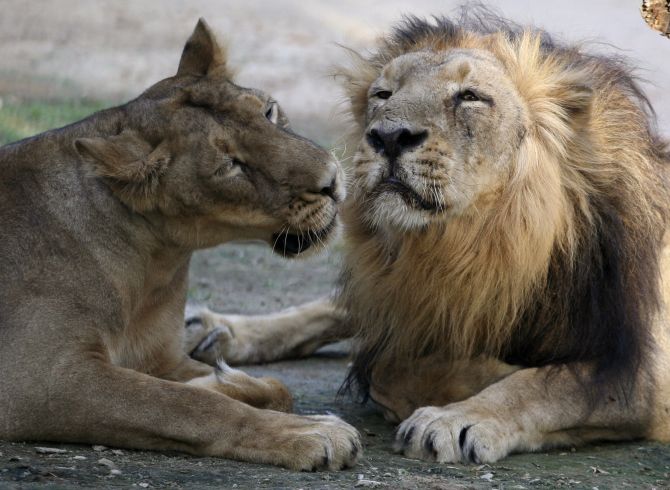 The Gujarat forest department on Sunday started vaccination of lions in the Gir sanctuary to protect them from a deadly virus blamed for the death of some of the big cats in their last abode.
As many as 23 lions have died in Gujarat's Gir sanctuary in less than a month. Most of them have succumbed to canine distemper virus (CDV) and protozoa infections, forest officials had said.
The lions, an endangered species, are being vaccinated under intensive veterinary care and as per standard protocol, officials said on Sunday.
CDV is considered a dangerous virus and had been blamed for wiping out 30 per cent population of African lions in East African forests.
"Vaccination of segregated #Lions under intensive veterinary care as per standard protocol started. Top national & International lion experts have been consulted. Government undertaking utmost care for lion safety," the Chief Conservator of Forest, Wildlife Junagadh, an official twitter handle of the Junagadha district forest department, said.
The Gir sanctuary falls under the Junagadha district forest department's jurisdiction.
A senior government official in Gandhinagar said only those lions which are in the forest department's captivity are being vaccinated at present.
Following the death of big cats, the forest department had captured 36 lions and shifted them to Jashadhar and Jamwala rescue centres in the Gir forest as a precautionary measure.
After the CDV spread was confirmed in Asiatic lions, the state government had urgently imported 300 shots of the vaccine against the virus from the United States.
CDV is mainly found in wild dogs, jackals and wolves. The disease can be contracted by lions if they eat any animal infected by it.
CDV is a highly contagious disease that attacks the immune system and other vital organs in animals. In most of the cases, the infection is fatal.
According to the last census conducted in 2015, the number of lions in the Gir sanctuary stood at 523.  -- PTI
« Back to LIVE