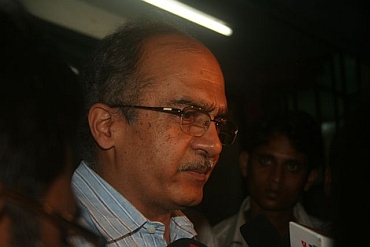 The Supreme Court Wednesday commenced its crucial hearing on pleas seeking a court-monitored probe into the procurement of 36 Rafale fighter jets from France. A bench comprising Chief Justice Ranjan Gogoi and justices S K Kaul and K M Joseph is also likely to peruse the pricing details of the jets submitted by the government in a sealed cover.


During the hearing, advocate Prashant Bhushan, appearing on behalf of himself, and former union ministers Yashwant Sinha and Arun Shourie, submitted that the NDA government "short circuited" the acquisition process by taking the Inter Government Agreement  route to avoid giving tender. He said there was no sovereign guarantee from the French government in the deal.


Bhushan argued that initially the Union Law Ministry had flagged the issue, but later gave in to the proposal of entering into the IGA. The Air Force needed 126 fighter jets and had intimated the Defence Acquisition Council about it, he said referring to the process of defence acquisition. Initially, six foreign companies had applied and two firms were shortlisted during the earlier process.


Later the deal went to French firm Dassault and state-owned Hindustan Aeronautics Ltd was part of it. But, suddenly a statement was issued and it said there will be no technology transfer, and only 36 jets would be procured, the lawyer told the court.


Bhushan submitted that nobody knows about the alleged change in the deal done by the prime minister and even the defence minister was not aware about the the change.


Advocates M L Sharma, Vineet Dhanda and AAP MP Sanjay Singh, also advanced their arguments before Bhushan. Sharma, who opened the argument, told the court that the IGA was "illegal" and sought an investigation into the matter. Dhanda sought a proper reply from the Centre on his plea questioning the Rafale deal.


AAP leader's counsel Dheeraj Singh questioned as to why the government reduced the deal of 126 jets to 36. He said the government should have increased the number of jets when there was a concern that adversaries were inducting more fighter jets.


Bhushan also raised the same point as Singh and said three and a half years have passed since the deal was signed on 36 Rafale jets but no aircraft has been received till now. He said the first jet is to be delivered in September 2019 and delivery to continue till 2022. "If the 126 aircraft deal was still on, at least 18 jets would have been delivered by April 2019," he submitted.  --  PTI
« Back to LIVE