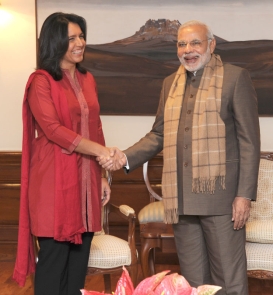 Tulsi Gabbard, the first Hindu lawmaker in the US Congress, is considering a run for the American presidency in 2020, according to sources close to her.


On Friday, at a Medtronic conference in Los Angeles an eminent Indian-American Dr Sampat Shivangi introduced Gabbard, 37, and said that she could be the next president of the US in 2020.


The brief statement was marked by a standing ovation, in the presence of the four-term Congresswoman from Hawaii. Gabbard, a Democrat, who addressed the gathering, however neither confirmed or denied that she is running for president in 2020.


A decision on this could be taken before Christmas, which might not necessarily result in a formal announcement as that could be delayed till the next year, people familiar with her thinking process told PTI.


However, it is said that she and her team has quietly been reaching out to prospective donors, including a large number of Indian Americans, and volunteers to build an impressive campaign for her 2020 run.


Given that Gabbard is highly popular among Indian-Americans, a constituency she has nurtured from the very beginning of her political carrier, it is but natural that her team has quietly started reaching out to this community, which is considered as the richest ethnic group after the Jewish Americans.