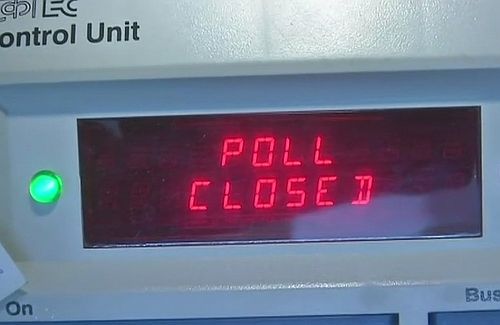 Polling for all 18 seats in the first phase of the Chhattisgarh Assembly Elections has ended.  Amid tight security, polling in 10 constituencies- Mohla-Manpur, Antagarh, Bhanupratappur, Kanker, Keshkal, Kondagaon, Narayanpur, Dantewada, Bijapur and Konta -- concluded at 3 pm. In the other eight constituencies -- Khairgarh, Dongargarh, Rajnandgaon, Dongargaon, Khujji, Bastar, Jagdalpur and Chitrakot -- polling concluded at 5 pm.


After 15 years, polling was held in Palam Adgu village of Sukma district where 44 voters exercised their franchise till 2:30 pm, a poll officer said.


Elderly voters, including some of them above 100 years of age, and persons with disability also came forward to cast their votes, the poll officer said.


At least 30 EVMs and 51 VVPAT machines were replaced due to technical snags, the poll official said. A thick security blanket comprising over 1.25 lakh police and paramilitary personnel was in place across the 18 constituencies, all of them falling in Naxal-affected areas of Bastar, Kanker, Sukma, Bijapur, Dantewada, Narayanpur, Kondagaon and Rajnandgaon districts.
« Back to LIVE