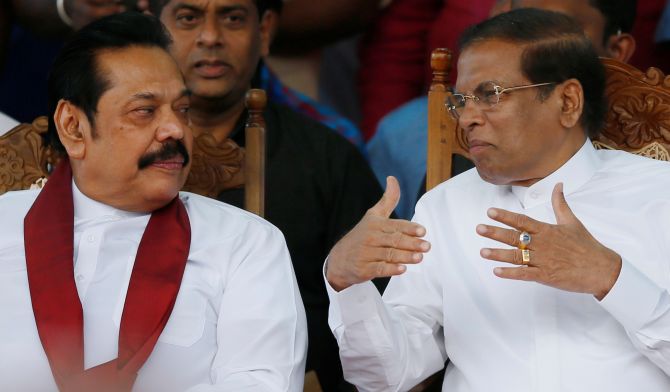 Sri Lanka's major political parties and an election commission member on Monday dragged President Maithripala Sirisena to the Supreme Court, challenging his controversial move of dissolving Parliament, almost 20 months before its term was to end.
Sirisena dissolved Parliament on November 9 and announced snap polls to be held on January 5 next year after it became evident that he did not have enough support in the House to prove the premiership of 72-year-old Mahinda Rajapaksa, whom he has appointed prime minister after abruptly sacking Ranil Wickremesinghe on October 26.
Rajapaksa needed the support of minimum 113 parliamentarians in the 225-member House to prove his majority.
Wickremesinghe's United National Party, the main opposition Tamil National Alliance and the leftist JVP or the People's Liberation Front were among the 10 groups that filed the fundamental rights petitions in the apex court, seeking declaration of the president's action as illegal, officials said.
The petitioners also include Election Commission member Prof Ratnajeevan Hoole.
The Supreme Court adjourned till Tuesday morning the hearing of the petitions, Daily Mirror reported.
The petitions were taken up for hearing before a three-judge bench comprising Chief Justice Nalin Perera, Justices Prasanna Jayawardane and Priyantha Jayawardane.
Sirisena on Sunday stoutly defended his move to dissolve Parliament, saying it was taken to prevent clashes among rival lawmakers. He said there were media reports that politicians would clash during the floor test, which was due on November 14.
In a televised address to the nation, the President said he heard stories from lawmakers on both sides of possible violence in Parliament that could even result in deaths and clashes spreading around the country.
"It appeared to me that, if I allowed Parliament to be convened on the 14th, without dissolving it, it could have brought about commotion and fights in every city and every village would lead to very unpleasant and difficult situation for the average citizens of my beloved country," he said.
"As such, the best solution was not to allow those 225 members in Parliament to fight each other and allow that to develop into a street fights in every part of the country.
"It is my duty and the responsibility to... create a situation for the 15 million voters in this country (to) take the ultimate decision by choosing their members to Parliament through a free and fair election," Sirisena added.
The Centre for Policy Alternatives (CPA), a leading civil society think tank, has also filed a petition, challenging the president's move.
"The CPA categorically opposes this move as it is unconstitutional and ultra vires," it said in a statement.
Rauff Hakeem, a leader of the Sri Lanka Muslim Congress, which also filed a petition said: "Filed action in the Supreme Court today challenging the purported dissolution of Parliament as untenable as per the 19th amendment of the Constitution".
The 19th Amendment to the Lankan Constitution restricts powers of the President to dissolve Parliament before the expiry of four-and-a-half years of a total five-year term.
Therefore, constitutionally a fresh election could not happen before February 2020 as the current Parliament's term was to expire in August 2020.  -- PTI
« Back to LIVE