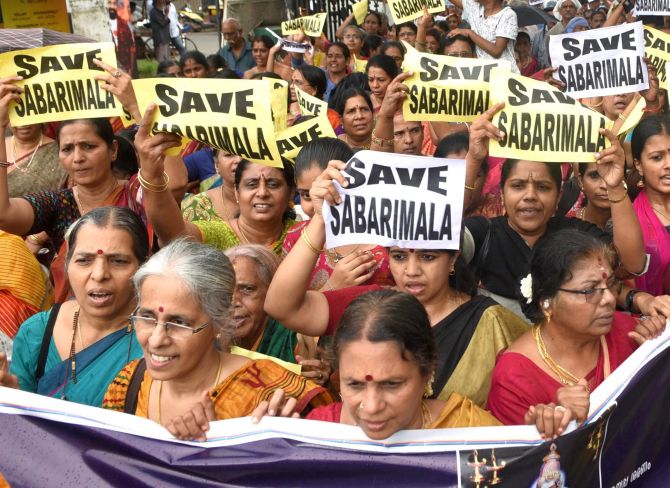 The Kerala government is likely to convene an all-party meeting to discuss various matters relating to the Sabarimala temple, which has been rocked by the issue of entry of women in the menstrual age, ahead of the annual pilgrim season commencing this week.
"We are thinking of having an all-party meeting. We have not taken a final decision yet. There are plans...," Devaswom Minister Kadakkampally Surendran told reporters in Thiruvananthapuram.
The hill shrine of Lord Ayyappa at Sabarimala opens on November 17 for the two-month long season in the backdrop of continuing protests against the Supreme Court order allowing women of all ages to offer prayers at the temple.
A batch of review petitions against the September 28 verdict that ended the ban on entry of women in the 10-50 age group into the shrine, will be heard on Tuesday.
Surendran said a decision on the all-party meeting would be taken based on the outcome of the court hearing.
The temple and nearby areas had witnessed massive protests from devotees against the entry of young women into the shrine, when it was opened for monthly pujas on November 5 and 6 and for five days from October 17.
Over a dozen women under 50 had been prevented from reaching the temple. The main opposition Congress had earlier urged Chief Minister Pinarayi Vijayan to convene an all-party meeting before the annual Mandala-Makaravilikku pilgrimage season.
Congress MLA K Muraleedharan had alleged that even basic infrastructure like toilets and drinking water for pilgrims was yet to be put in place at Sabarimala.
The devastating floods in August had caused severe damage to the infrastructure facilties at Pamba following which the base camp had been shifted to Nilackal.
"The facilities for the pilgrims will be completed before the start of the pilgrim season," Surendran added.  --  PTI
« Back to LIVE