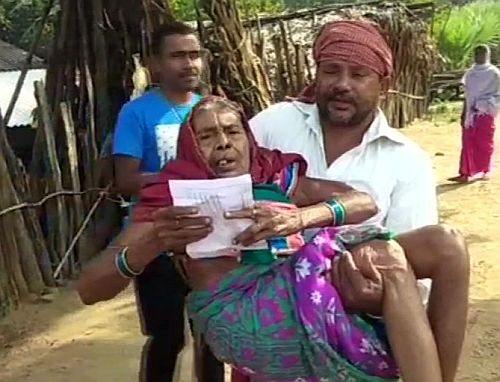 A healthy 25.15% voter turnout has been recorded till 1 pm in the first phase of the Chhattisgarh Assembly Elections even as two CoBRA personnel were injured in an exchange of fire with Naxals in Bijapur district.


Polling in 18 assembly constituencies in the first phase of the Chhattisgarh elections began on a slow note Monday with about 14 per cent of the electorate casting their votes in the first few hours, a poll official said.


An improvised explosive device was detonated early morning in Dantewada district by Naxals, who had called for a boycott of the polls, police said. Voting in nine seats of Bastar division and one seat in Rajnandgaon district began at 7 am while in the other eight seats, it started at 8 am.


Image: In Sukma, a 103-year-old woman, Soni Bai, exercised her voting rights at a polling booth in Gorgunda's Devarpalli. His son carried her to the polling station. Pic: ANI
« Back to LIVE