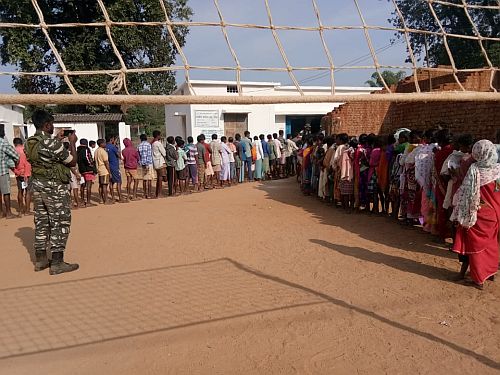 Voting underway in interior areas of Kistaram, Palem and Bejji in Naxal-affected Sukma district in Chhattisgarh. An IED was detected near a polling booth in Konta's Banda in Sukma. Nevertheless voters queued up at polling booths like this makeshift one under a tree, to cast their vote. 10.7% voter turnout recorded till 10 am in the first phase in 18 constituencies in the Naxal hotbed. At least 700 paramilitary companies have been deployed to keep the peace.


A thick security blanket, comprising over 1.25 lakh police and paramilitary personnel, was thrown across the 18 constituencies as they fall under the Naxal-hit areas of Bastar, Kanker, Sukma, Bijapur, Dantewada, Narayanpur, Kondagaon and Rajnandgaon districts.


Polling in 10 constituencies -- Mohla-Manpur, Antagarh, Bhanupratappur, Kanker, Keshkal, Kondagaon, Narayanpur, Dantewada, Bijapur and Konta -- started at 7 am and would conclude at 3 pm, an election official said.


In the other eight constituencies -- Khairgarh, Dongargarh, Rajnandgaon, Dongargaon, Khujji, Bastar, Jagdalpur and Chitrakot -- voting began at 8 am and would end at 5 pm, he said.
« Back to LIVE