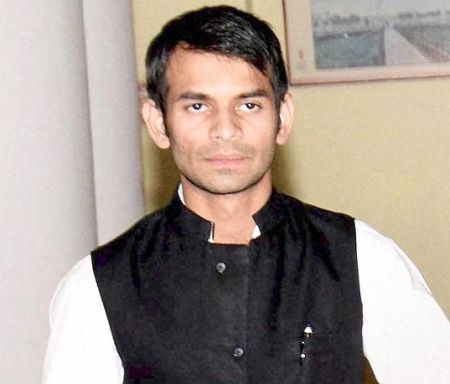 Rashtriya Janata Dal leader Tej Pratap Yadav, who met his father Lalu Prasad in Ranchi on Saturday regarding his decision to divorce his wife, did not return to Patna as expected but left mid-way for an unknown destination, sources close to the family said on Tuesday.
Yadav had met his father for a couple of hours at the Rajendra Institute of Medical Sciences hospital in Ranchi, where the RJD supremo is lodged in custody in connection with a fodder scam case, on Saturday and checked in at a Bodh Gaya hotel on Sunday night, local MLA Kumar Sarvjeet said.
He left the hotel Monday afternoon, saying he was going to Patna, Sarvjeet added.
"I met Yadav, along with other party leaders, over dinner on Sunday. He was looking exhausted. He bade us goodbye on Monday, saying he was returning home. I have the knowledge of his movements only till his departure from the Royal Residency hotel," the MLA told PTI over phone.
The mercurial elder son of Prasad and former Bihar chief minister Rabri Devi, however, was yet to reach Patna, his family sources said.
Yadav had told reporters after meeting Prasad that he stood by his decision to give divorce to his wife of six months, Aishwarya Rai.
"No person can live a stifled life," he had said.
Yadav is said to be fond of visiting places of pilgrimage like Vrindavan and Varanasi for spiritual solace and one of his grouses against his wife is that she has not been able to adjust to his way of life.
Yadav, a former Bihar health minister, had recently spent a number of days in Vrindavan, where he was reportedly seen playing a flute with a peacock feather tied to his head in the midst of a herd of cows.
Neither Aishwarya, who is the daughter of RJD MLA Chandrika Rai and granddaughter of former Bihar chief minister Daroga Prasad Rai, nor any member of her family has spoken on the matter so far.
She had tied the knot with Yadav on May 12 and the RJD leader had moved an application seeking divorce on November 2, citing incompatibility.
Yadav has also been dropping hints that he is not getting along well with younger brother Tejashwi, who has emerged as the party's de facto leader in their father's absence.
Prasad, who is serving sentences in fodder scam cases, had flown in from Ranchi after obtaining parole from a court to attend Yadav's wedding, which was attended by the leaders of virtually all the political parties, including Chief Minister Nitish Kumar and Union minister Ram Vilas Paswan.
Setting political acrimony aside, the Bharatiya Janata Party said it wished that the young couple resolved their differences and reunited on the auspicious occasion of Deepawali.
"It is a family matter, which has to be resolved by both sides. One should refrain from making political statements on the issue. It is unfortunate for a young couple to have experienced such a discord. Best wishes to Aishwarya, who is the daughter of the society, and hopes for her happy reunion with Tej Pratap by Deepawali," state BJP spokesperson Nikhil Anand said.  -- PTI
« Back to LIVE