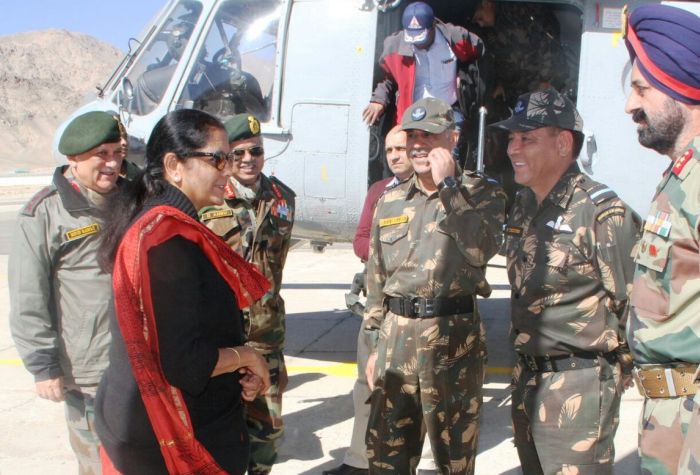 Defence Minister Nirmala Sitharaman will celebrate Diwali with Indian Army troops deployed at forward posts in  Dibang Valley district of Arunachal Pradesh, officials said on Tuesday.
She will fly over the general area and visit Anini and Andrala Omkar forward posts and meet the troops there on Wednesday, Kohima-based Defence spokesman Col Chiranjit Konwer said.
The high altitude post of Andrala Omkar is 35-40 km from the nearest road head, he said.
Sitharaman would be briefed about the defence preparedness and infrastructure improvements by the Army and would also meet and interact with the families of soldiers who died in the line of duty, the spokesman added.
Eastern Army Commander Lt Gen Manoj Mukund Naravane and other senior officials of the Army will accompany her during the entire visit.
*****
Gujarat Chief Minister Vijay Rupani will celebrate Diwali with Border Security Force personnel at Nada Bet Border Outpost near the Indo-Pak borderin Banaskantha district on Wednesday.
Rupani would exchange sweets with BSF jawans on Diwali tomorrow, said an official press release, adding that the CM is continuing the tradition of celebrating the festival with BSF jawans.
In 2016, Rupani had visited Nada Bet to celebrate Diwali with BSF jawans.
Last year he celebrated Diwali with BSF personnel at Koteshwar in Kutch district.  -- PTI
« Back to LIVE