« Back
Sirisena suffers reversal in his parliament majority claim
November 06, 2018  19:05 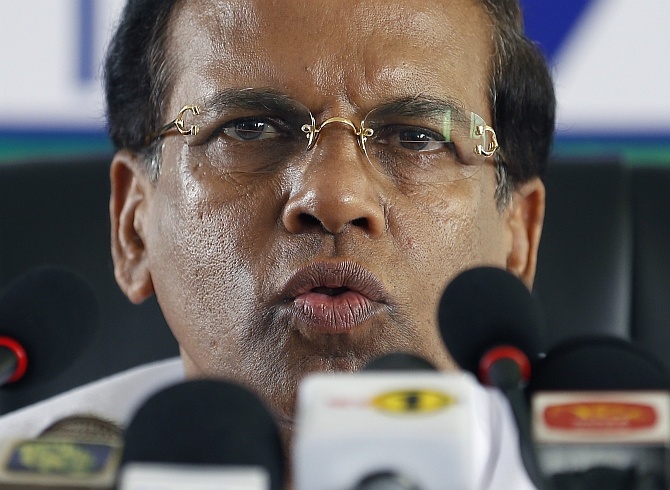 In a setback to Sri Lankan President Maithripala Sirisena, a deputy minister of his United People's Freedom Alliance government resigned on Tuesday and backed ousted prime minister Ranil Wickremesinghe in the ongoing political crisis.
President Sirisena sacked Prime Minister Wickremesinghe on October 26 and replaced him with Mahinda Rajapaksa, a controversial former president, and suspended parliamentary proceedings until November 16.
Manusha Nanayakkara, who was in Sirisena/Rajapaksa original list of 96 MPs, said in a letter to Sirisena Tuesday that in his opinion Wickremesinghe was still the legitimate prime minister as accepted by the parliamentary speaker Karu Jayasuriya.
He resigned as the deputy minister of Labour and Foreign Employment to leave the Sirisena camp and join Wickremesinghe. He was sworn in as the deputy minister only on November 1.
In a video message, Nanayakkara said that he does not approve of the arbitrary political appointments that have taken place and will support the struggle to protect and uphold democracy.
Nanayakkara's defection came hours after Sirisena announced publicly that people should not doubt his majority -- 113 in the 225-member legislature.
Legislators have been switching sides ever since the island nation was plunged into a political and constitutional crisis with Sirisena's move to sack Wickremesinghe last month.
Rajapaksa had been bolstered by at least 9 defections from Wickremesinghe's United National Party and Tamil National Alliance.        Since the crisis broke out there have been media reports that MPs were offered up to 500 million rupees to switch sides.
Speaker Karu Jayasuriya on Monday slammed Sirisena's 'unconstitutional and undemocratic' actions to sack Prime Minister Wickremesinghe and suspend Parliament, saying he will not recognise Rajapaksa as the new premier unless he wins a floor test.
He asked the president to reconvene the parliament for a floor test and end the ongoing political crisis.
Sirisena's side charged that Jayasuriya, a UNP senior, was backing his party leader Wickremesinghe by compromising the neutral position of speaker of parliament.  -- PTI
« Back to LIVE