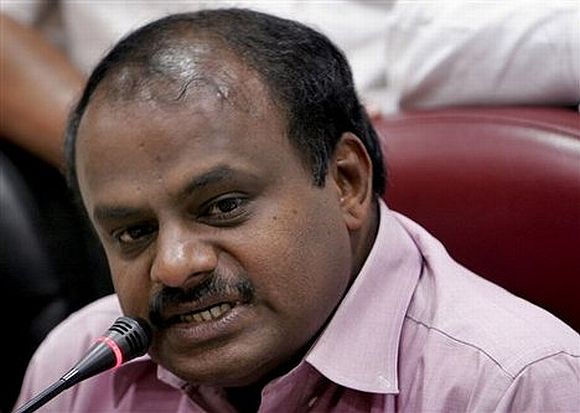 Karnataka Chief Minister H. D. Kumaraswamy on Tuesday said that the victory of Congress-Janata Dal (Secular) (JD-S) alliance in the by-elections was the first step towards winning all 28 Lok Sabha seats in the state in 2019 general elections.


Addressing a press conference following the alliance's victory in two out of three Lok Sabha and two state assembly constituencies, Kumaraswamy said, "We have already decided to contest Lok Sabha polls together, but there is no question of us getting carried away by this. Our intention is to win all 28 seats in the Lok Sabha polls and to give the people as many programmes as possible by achieving that goal. This is not an empty promise just because we have won today. This (victory) reflects the confidence people have on us. This win is not making us arrogant."


The chief minister underlined that although the Bharatiya Janata Party won the Shimoga Lok Sabha constituency, the moral victory was theirs. "BJP might have won in Shimoga but the moral victory is ours. Our candidate was abroad when we decided to select him. But he has done exceedingly well. Even in Jamakhandi and Ramanagara, our candidates have won. I would like to thank the people of the state for this," Kumaraswamy said.


He also lauded workers of both parties for their work during the elections, adding that the victory was a reply to the BJP, who termed the Congress-JD(S) alliance as an 'Apavitra Maitri' (unholy alliance).


"In this election, Congress leaders Siddaramaiah, Parameshwara, Shivakumar, Kagodu Thimappa, Dinesh Gundu Rao have worked very hard. I want to personally congratulate all the workers of both parties for this. Our victory in four seats and very narrow loss in one, despite BJP allegations that this was an unholy alliance, is a reply to the BJP," Kumaraswamy said. -- PTI
« Back to LIVE