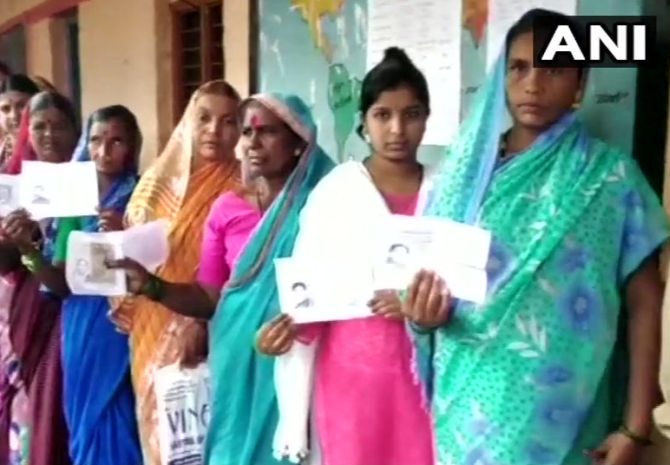 The results for three Lok Sabha and two assembly constituencies in Karnataka that Saturday went to the bypolls, seen as a prestigious popularity test for the ruling Congress-JDS coalition, will be declared today.
An estimated 67 per cent voter turnout was recorded in the bypolls for five constituencies.
A total of 31 candidates were in the fray from all the five constituencies, though the contest is mainly between the Congress-JDS combine and the BJP.
The bypoll results will determine the fate of Chief Minister H D Kumaraswamy's wife Anita Kumaraswamy, state BJP chief B S Yeddyurappa's son B Y Raghavendra and former Chief Minister S Bangarappa's son Madhu Bangarappa and others.
Among the interesting things that one needs to watch out for is to what extent BJP would be able to make inroads into the JD-S bastion of Mandya and the Congress stronghold of Jamkhandi.
Of similar interest would be to what extent the Congress will be able to regain its significance in its erstwhile party stronghold of Ballari, the seat earlier won by its top leader Sonia Gandhi.
The outcome of the bypolls is expected to have a bearing on the equations between the Congress and JD-S for the 2019 polls and also be a factor in determining the respective bargaining power of the two parties.
The bypolls were seen as significant as the coalition partners contested together, terming it as a "prelude" to the May 2019 general elections and called for a similar "grand secular alliance" against the BJP at the national level.
-- PTI
« Back to LIVE