« Back
Cameraman injured in protests at Sabarimala over reports of woman's entry
November 06, 2018  08:38 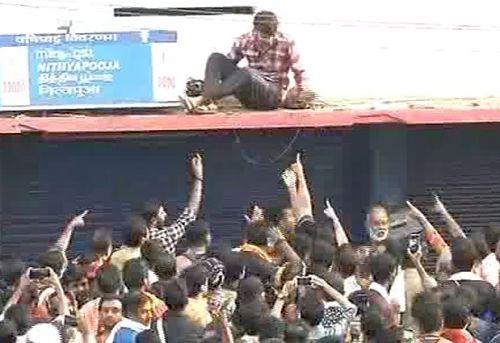 A video journalist was injured after protesting devotees targeted media persons at Sabarimala Tuesday morning. Hundreds of protesters gathered at Sannidhanam or the inner courtyard after a woman devotee, suspected to be in the menstrual age, tried to enter the temple.
The police have confirmed that the devotee is 52-year-old Lalitha, from Thrissur, who had come to the temple with her son. The two were escorted to the temple by the police. "I am not afraid, I want darshan of Lord Ayyappa," Lalitha told reporters.
The Sabarimala shrine opened yesterday for the second time in three weeks for a two-day special puja amid unprecedented security over fear of protests by those opposing the Supreme Court's order allowing women of all age groups into the temple.
No woman in the age group of 10-50 years have yet been able to visit Sabarimala temple since the top court's order on September 28.
The temple town has virtually turned into a fortress with hundreds of police personnel, including armed commandos, deployed in large numbers. Surveillance cameras and mobile phone jammers were also installed.
« Back to LIVE