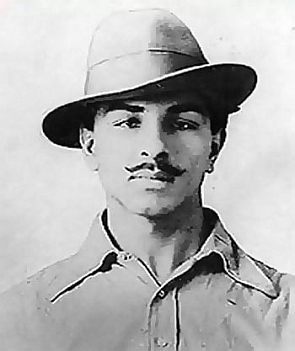 The Central Information Commission has recommended to the home ministry that it should explore whether the status of martyr can be accorded to Bhagat Singh.
It has also said that in case it cannot be done, the government must give a detailed explanation for that.
Information Commissioner Sridhar Acharyulu said government facilitates freedom fighters and gives pension but revolutionaries like Bhagat Singh are not even give the status of a martyr leave aside any financial support to their families.
The matter pertained to an RTI applicant who had sought to know from the government whether it gave him the status of Shaheed and if not, what must have been the legal limitations.
Bhagat Singh and his revolutionary comrades Rajguru and Sukhdev were hanged by the British on March 23, 1931 in the Lahore Conspiracy case.
The applicant sought information from the Rashtrapati Bhavan which forwarded his request to the Home Ministry which in turn sent it to National Archives for response.
Not getting any satisfactory response, the applicant approached the Commission seeking directions for disclosure of information.
"A demand to declare Bhagat Singh, Rajguru and Sukhdev as martyrs is made every year during their birth and death anniversaries. Punjab government had declared Sarabjit Singh as a 'national martyr', who died in Kot Lakhpat jail, but Bhagat Singh and others were ignored," Acharyulu pointed out.
He said newspapers had reported on May 20 that the Punjab and Haryana High Court held that status of martyr could not be conferred on these three martyrs because there was no statutory basis.
Acharyulu also pointed out that the Punjab government claimed that no official recognition could be given to anybody as a "martyr" as Article 18 of the Constitution does not permit conferring of any title by the state.
He underlined that top level political personalities are generally given Bharat Ratna, martyrs of war and heroic personalities in army get Vir Chakra awards, meritorious persons from different civilian services get recognised with Padma awards.
At a different level, the nation expressed gratitude to the freedom fighters and their families by bronze plate and pension, he said. -- PTI
« Back to LIVE