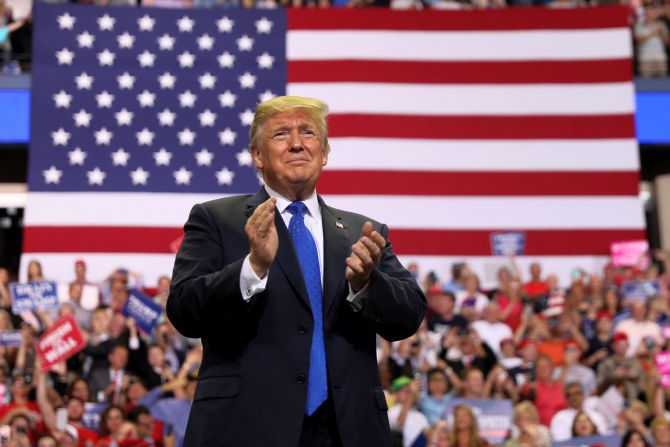 President Donald Trump said on Wednesday in a presidential memorandum that he had determined there was sufficient supply of petroleum and petroleum products for countries to 'significantly' reduce their purchase of crude oil from Iran, which is going face US sanctions from November 5.
In May, Trump had pulled out of the 2015 landmark nuclear deal, the Joint Comprehensive Plan of Action (JCPOA) terming it as 'disastrous'. Under the Obama-era deal, involving five permanent members of the United Nations Security Council and Germany, Iran had agreed to stop its nuclear programme in exchange of relief from economic sanctions.
Moments after coming out the deal Trump had signed fresh set of sanctions against Iran and warned countries against any cooperation with Tehran on its controversial nuclear weapons programme.
In his presidential determination, Trump said 'there is a sufficient supply of petroleum and petroleum products from countries other than Iran to permit a significant reduction in the volume of petroleum and petroleum products purchased from Iran by or through foreign financial institutions."
Trump's presidential determination, not an executive order but a kind of directive issued by the White House to the members of his adminstration on some policy matters, comes less than 100 hours before the deadline set by him for countries like India to bring its purchase of oil to zero from Iran by November 4.
India has expressed its difficulties in doing so given the galloping energy needs of its 1.3 billion people. More than 80 per cent of India's energy needs are imported.
But at the same time, India has taken steps to reduce its oil purchase from Iran, which has already declined substantially.   -- PTI
« Back to LIVE