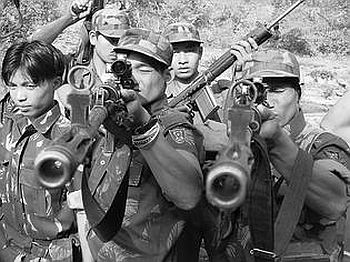 Three members of a family were among five persons shot dead by suspected ULFA-Independent while two others were injured at Kheroni in Assam's Tinsukia district Thursday night, police said.
A group of assailants with sophisticated weapons came to Kheronibari village near Dhola-Sadiya bridge and called out five-six persons from their house around 8 pm, they said.
They then opened indiscriminate fire upon those people before fleeing under the cover of darkness, a police officer said.
Police suspect the gunmen belonged to the ULFA-Independent faction as they were in battle fatigue.
Chief Minister Sarbananda Sonowal condemned "the killing of innocent people" and conveyed his sympathy to the bereaved families.
"Strong action will be taken against the perpetrators of this dastardly violence. We will not tolerate such cowardly act," he told PTI.
Sonowal said he has directed state ministers Keshav Mahanta and Tapan Gogoi along with DGP Kuladhar Saikia to rush to the spot.
"We will not spare the culprits of the killings and will be brought to book," he said.
The chief minister appealed to the people of Assam to maintain peace and harmony.
He also directed all deputy commissioners and SPs to remain alert. -- PTI
« Back to LIVE