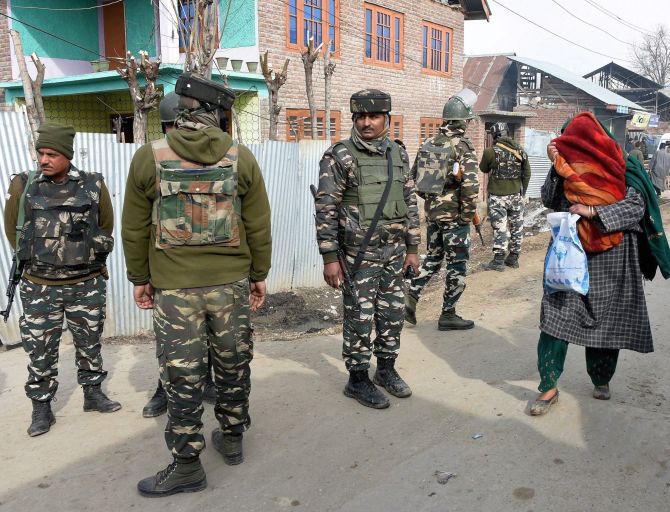 Union Home Minister Rajnath Singh today made clear that the security forces would act if there were terror attacks during Ramzan, the period during which the Centre has halted anti-militancy operations in Jammu and Kashmir.
Asked about the continuing violence during the Ramzan 'ceasefire', Singh said the Centre had only announced a suspension of operations.
"If there is a terrorist attack, the hands of the jawans are not tied," he added.
On his recent comment on the possibility of talks with Pakistan or the separatists for peace in Kashmir, he said the country has no aversion to dialogue.
Singh, who is also an MP from Lucknow, was addressing reporters on the completion of four years of the National Democratic Alliance government.
He said the Centre was trying to bring petroleum prices under control, saying the hikes were the result of increase in international crude oil rates and the rise in the value of the dollar.
"I accept that problems have emerged because of the rise in dollar and crude oil prices," he said at a joint press conference with Uttar Pradesh Chief Minister Yogi Adityanath.
The home minister said while 471 terrorists were killed in 2010-13, 619 have been killed in 2014-17.
He said the number of districts affected by Naxalism has dropped from 76 in 2013 to 58 in 2018.
"Our crime and criminal tracking network and systems (CCTNS) is winning praise from all over the world," he said.
Lauding the para-military forces, he said,"When a jawan attained martyrdom, Rs 50 lakh to Rs 55 lakh used to be given to his family but now we have decided that the amount should not be less than Rs 1 crore."
Asked about economic offenders leaving the country, the minister said, "I want to ask the Congress people if no one had fled during their government."
He said there was special thrust on infrastructure development under the Narendra Modi government, and by 2040 four to five trillion dollar investment was likely in this field alone.
"It is a fact that during the last four years of the UPA government, on an average, 12 km of highways were constructed on a daily basis, which went up to 27 km in the four years of the present government," he said.
He said road connectivity was a gift from former prime minister Atal Bihari Vajpayee, and the effort has been taken forward by Modi.
Singh stressed that none of the ministers in the Modi goverment faced any corruption charge.
He praised the Yogi Adityanath government in Uttar Pradesh, saying there has been fear among criminal elements since he came to power.  --  PTI
« Back to LIVE