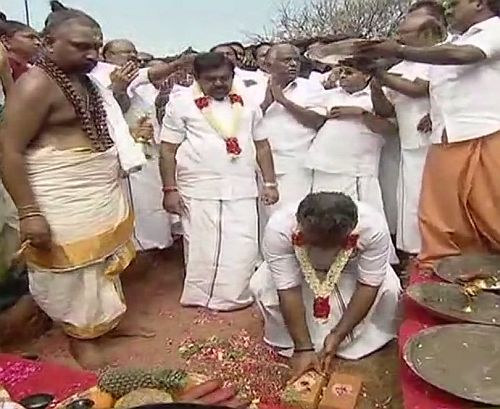 Tamil Nadu Chief Minister K Palaniswami and Deputy Chief Minister O Panneerselvam today laid the foundation stone for a memorial 'mandapam' of late J Jayalalithaa in Chennai abutting her burial site on the Marina beachfront. Palaniswami placed the first brick for the construction on the ground, and Panneerselvam the second, marking the formal inauguration of work for the memorial at the beach complex.


A 'yagna' and special prayers were conducted ahead of the stone laying event in which Lok Sabha Deputy Speaker M Thambidurai, Tamil Nadu Ministers, MPs and MLAs participated along with the chief minister and his deputy.


A large number of AIADMK workers took part in the event. The proposed memorial 'mandapam' for late chief minister Jayalalithaa is set to come up behind the memorial of AIADMK founder and former Chief Minister M G Ramachandran.


Jayalalithaa's mausoleum was decked up for the event. Elaborate security arrangements were made for the stone- laying ceremony. Jayalalithaa died on December 5, 2016. PTI
« Back to LIVE