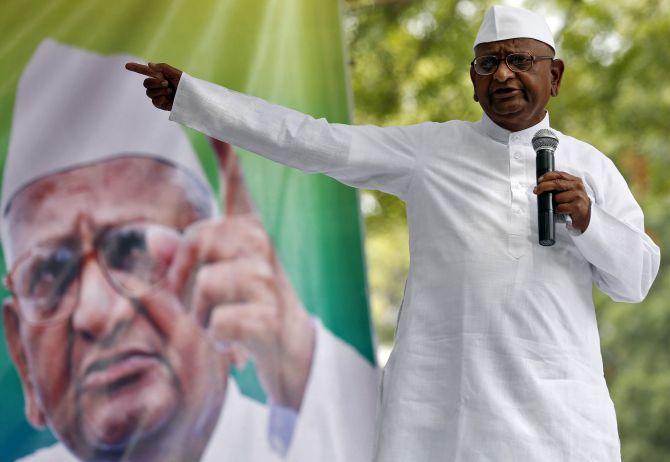 Social activist Anna Hazare on Saturday sternly said that he will not tolerate involvement of any political party or group in the hunger strike which he started a day ago at Delhi's Ram Lila Maidan. "I will not let any political party or group to come on this stage," he said.
The social reformer also said that whoever joins the movement will have to sign an affidavit which states that they will neither join any political party/group nor will contest elections. They will ensure service to the country, the society and maintain good character.
Anna Hazare called for an indefinite fast on Friday nearly seven years after his anti-corruption movement shook the then Central government led by prime minister Manmohan Singh in 2011. March 23 was chosen as the date to begin the fast as Bhagat Singh, Rajguru and Sukhdev were hanged to death on this day by the British.
Hitting out at the Narendra Modi led government, Anna called all politicians 'fraud'. "Farmers are suffering and politicians are not capable to rule people. I will fight till the last breath," he said.
« Back to LIVE