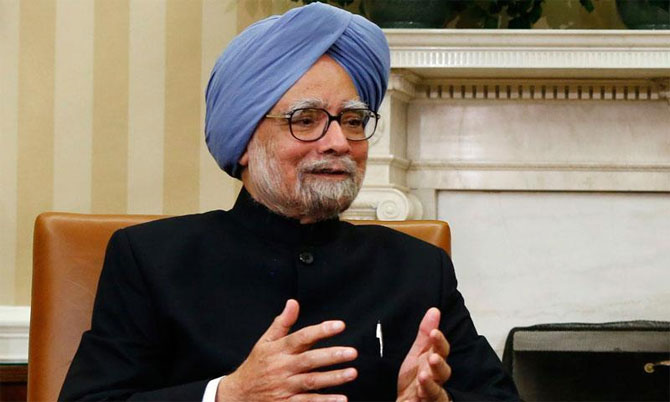 At a time when our democracy is "experiencing some shocks", journalists should stand up for defending and promoting the values enshrined in the Constitution, former Prime Minister Manmohan Singh said on Thursday.
He was speaking at an award ceremony in New Delhi.
"Ideas are very important to sustain in democracy and at a time when our democracy is experiencing some shocks here and there, it is important for journalists to stand up for defending and promoting value systems which are enshrined in our Constitution", Singh said.
Media must support and strengthen the democratic values that we all cherish, he said.
Presenting the GK Reddy Memorial award to eminent journalist Karan Thapar, Singh emphasised on the role of media in democracy and said the fourth estate should use its freedom to promote objectivity of thinking.
Deputy leader of the Congress in Rajya Sabha, Anand Sharma, who was also present referred to the present logjam in Parliament and said in a democracy sometimes regional problems find their expressions in the form of disruptions but a dialogue or debate can address the issues better.
"In a vast country like ours, strong regional interests, and regional problems which find their expressions sometimes in the form of disruptions. A dialogue, a decent debate can perhaps address the issue better. It would have informed the people better as to why a section of our legislators feel aggrieved or agitated and after many many disruptions sometimes there are debates or discussions which are very enlightened,"  Sharma said.
Sharma's comments came in the backdrop of regular disruptions that the Parliament has witnessed in its current session especially over the demand for conferring special status on Andhra Pradesh.
The function was organised by Congress Rajya Sabha member T Subbarami Reddy, who is also the founder of G K Reddy Memorial Award and TSR Foundation. -- PTI
« Back to LIVE